Nullsec: The Cold War heats up

A very large battle was fought yesterday in Delve in QY6-RK, at the southern end of the CFC Empire. 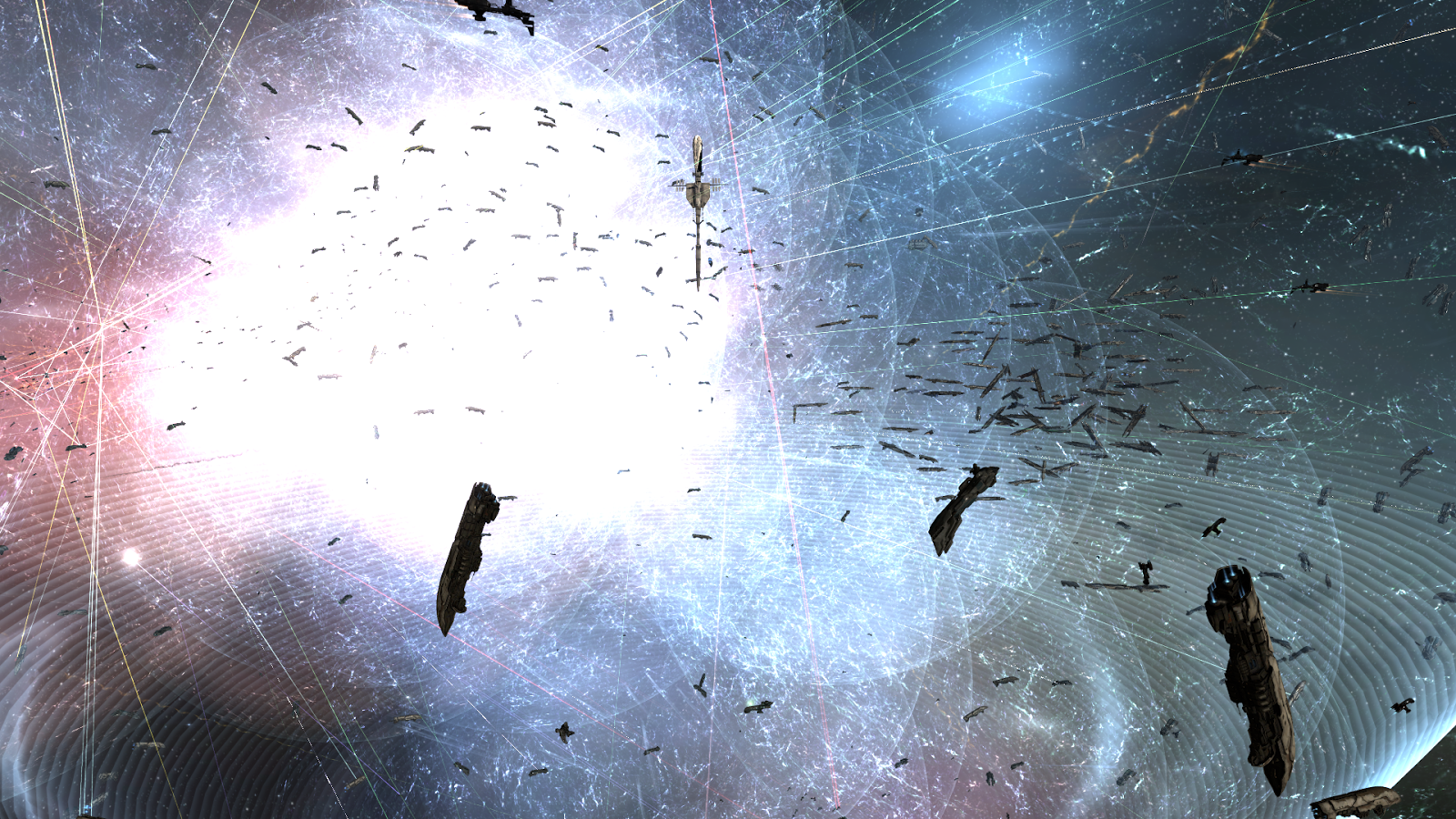 The N3 coalition responded to The Mittani's recent claim that there would be no summer war by reinforcing a LAWN CSAA - a large POS module capable of building titans or supercarriers. The CFC responded in force - I was part of a massive armada that included over 200 Megathron battleships. At one point on the POS grid there were 1290 ships - here's a D scan of ships on grid during the fight. According to the final battle report there were over 1000 from the CFC against just over 600 from N3 and HERO. Local peaked at just under 2000. Tidi was 10% for most of the battle.

These charts show the isk loss over time. At first N3 was winning the isk war but the battle turned and they took heavy losses disengaging.

Now politically it was a good time to test the CFC. CFC alliances Gents (in which I had found myself) and Li3 had recently collapsed with a new alliance, The Bastion, formed from the ashes. A reddit troll that FA had collapsed was widely believed. Two key corps left Razor Alliance. From the outside it may have looked like much of the CFC was close to failcascade.

However the reality lies in a term Gevlon coined: fleetbears. Most of the CFC happily rat or mine most of the time, making us look like easy prey to people who pvp all the time but we do get into our big ships and field strong numbers for key operations. "Carebears" who fleet up for, say, CSAA saves. A typical CFCer is ratting his way into a titan or super, occasionally pausing to join a strat op if it gets heavily pinged on jabber. This is quite simply a playstyle that works for many of us and to some extent the specific corp or alliance ticker doesn't matter so much as being able to rat in nullsec for the most part in peace and getting SRP-assisted defence when the Coalition is threatened. As The Mittani said when The Bastion was formed "For years we have noticed that corporations move around within the CFC, but almost never leave it."

The Bastion has proved to be a good home for most of the alliances it took in. We have active fleets and a core of aggressive pvpers and experienced players. And of course we do lots of ratting.

And the familiar issues that I found difficult to bear while I was on the side that opposes the CFC struck in full force. Pandemic Legion has spent the last month blowing up the ships that their allies need for the war, with a "friendly reset" of Nulli, much like the friendly reset of Test last year which led so rapidly into Test going broke in the Fountain War. There's a lack of coordination - while everyone in the CFC came to the op yesterday no one from Test was on the report and only 8 people from PL. Spaceship Samurai didn't come. Brave brought no more than Fatal Ascension and in much cheaper ships. Black Legion, MOA and Pasta brought low numbers and seemed equally happy to shoot either side.

This is why I left that team - it's frustrating if you want to win to see half your side not trying or even working against you.

The battle itself was a heavy defeat for N3 with over 43 billion isk lost and many T3 strategic cruisers killed. causing pilots to also lose skill points. It was also a great day for the salvagers and tractor units - at least those who weren't blown up by jealous friendlies.

Personally I added to my tally of celebrity kills by bagging both of Nulli's main FCs and picking up the leader of INK. I also bagged 14 T3 Cruisers.

The CFC got to the field first and set up around the pos. It was quickly repaired by carriers leading to a strategic win before the battle began. Our FC was very concerned about bombers so we formed by orbiting the pos shields in our battleships making it difficult for a single bombing run to kill a large clump of battleships. N3 countered our apoc/megathron fleet by using protei and legions. They were armour tanked and were using their mid slots for tracking disruption, hoping that the low sig radii of the strategic cruisers would make them too difficult for the battleships to do effective damage to.

I think they basically got the maths wrong. First of all it's difficult to effectively ewar if you have lower numbers. No one tracking disrupted my Mega for the entire fight - there just weren't enough of them to cover us all. Next they're not bonused for tracking disruption - it would have been better to get Brave to come in Arbitrators and Crucifiers if they had wanted this tactic to work. Next Megathrons and Apocs both have ship bonuses to tracking - we're the battleships this tactic works least well on. Finally we simply weren't having trouble hitting. The primaries were double webbed and painted - hugely lowering their ability to sig tank us.

I do really admire the ballsiness of the N3 who gave this a really good shot but fighting out-numbered may work 3 v 5 it doesn't usually work in large battles.

Fired by the win the CFC's new Sky Marshall, Blawrf McTaggart has announced an aggressive campaign over the weekend. Expect more fights today.

(Hatip to reddit user /u/korniax for the beautiful screenshots).