Phew, coming up for air after being immersed in the Alliance Tournament I can now think about picking up where I left off with other Eve projects.

I tried running abyssal sites tonight and lost a Gila on the second site. Luckily it was only a T2 fit ship so it wasn't too expensive. So I sat down and reviewed the theorycraft.

First point is clouds. Clouds are bad. I didn't pay attention to clouds and honestly don't know if I was in one which is doubly bad. I ran out of cap booster charges so it's likely I was in the cloud that makes active shield tanking much more cap expensive. Doh!

I decided I'd like to test if a passive tanked Gila is comfortable in level 4 sites, specifically Raging Firestorm sites. The thing with passive tanks is that they're all or nothing - either you tank like a boss or your tank collapses and you die really quickly. The fit I've made tanks 214 ehp/second and has 56.4k ehp. In Gamma weather that goes up to 50% more of both I think I'll need to check.

It's a lot more resistant to being neuted than my previous fit which so far has been the reason I die. It's a little more expensive but because it doesn't use Crystal implants it's not too expensive, Pyfa shows 508m for ship + implants.

This is the ship fit I'm going to test on sisi, the test server. 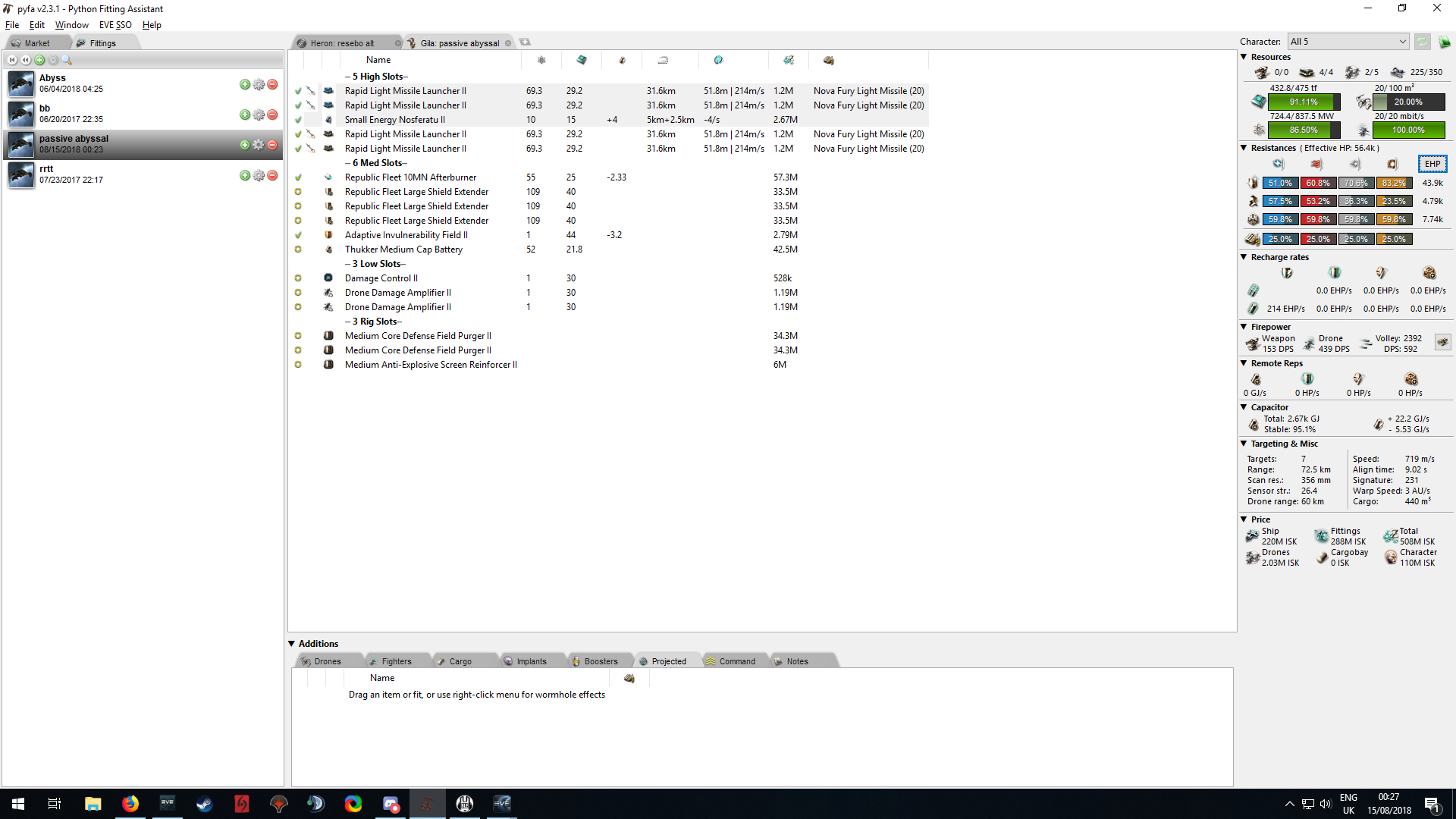 In a couple of hours the team I fly for will face A Band Apart, the alliance run by and represented in the AT by the incomparable Rixx Javix, writer of the Eveoganda blog. You can watch it on Twitch here.

Both teams made top 16 last year. This time only one will, the winner of this match makes it to the crucial benchmark that guarantees seeding for next year's tournament. Seeding is very important because it means you won't face another top 16 team in your first two matches so generally (but not always) you will face teams weaker than yourself.

I briefly joined ABA earlier this year while looking for a new home but it wasn't quite right for me. I'm happier in an alliance that is busy in EU timezone and the patient low sec pirate style wasn't quite what I was looking for. Also they generally don't hop on comms for brief skirmishes which was something I'm no longer accustomed to. I can see a case either way but personally I'm very much inclined to communicate on comms while fighting in a gang.

Those things said I'm an enormous ABA and Rixx fan. I hope they'll forgive me if I don't wish them luck today ;)
Posted by Stabs at 14:38 2 comments: 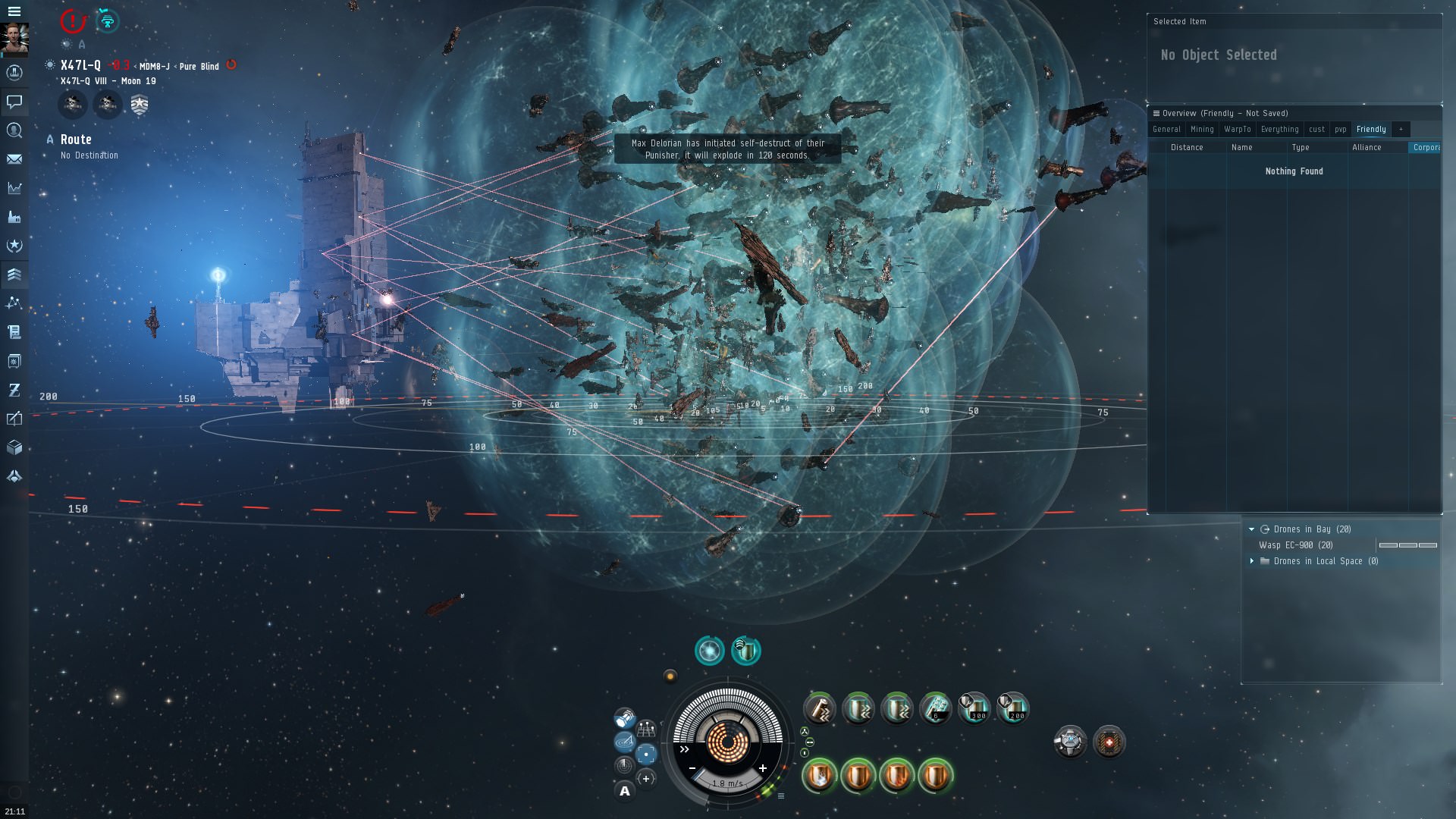 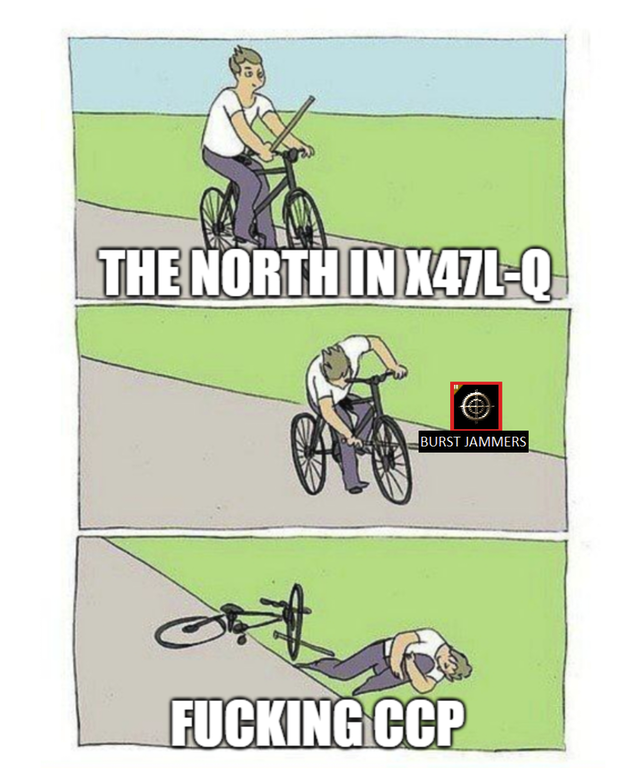 PL leader Doomchinchilla had a number of things to say, none of which are repeatable on this mild-mannered blog.
Posted by Stabs at 01:32 No comments:

If you've been idly considering starting a blog this month is a good time to put your toes in the water and see if you like it.

Blogging is about getting your opinion out there. For some of the best bloggers it goes beyond opinion and towards journalism where the writer is sourcing his information and checking financials etc: this guy is Eve's best exponent of that style at the moment.

Blogging has advantages over other forms of expression.

- Control. This is my blog, I control what appears here, I can publish guest articles from other writers, I can delete comments I don't like, etc.

- Community. Typically other bloggers will make up a lot of your active community. All blogs have a majority of readers who quietly absorb the articles and never comment. The people that interact with you tend to be other bloggers. For instance Ancient Gaming Noob and Rixx Javix, two of the most admired Eve bloggers commented on my last post. We're a community and in some ways quite like-minded.

- Archiving. By google's grace these blogs endure indefinitely. I can go back to my articles from about 10 years ago when I started blogging. That's probably more enduring than if I saved them to a hard drive unless I maintained a collection of detachable drives or something. In an ephemeral age these free blog platforms are very persistent and it's very nice to be able to look back on what I wrote years ago. (And how right I was! ;) )

- A place to start. It's very easy now to write for the semi-professional Eve sites like INN or CZ. But if you're new it might be nice to blog first, find your writing style, then publish on a site that will draw a wider audience but potentially more criticism.

- A diary. Blogging has its origins as online diaries, the word literally comes from "web log." Diarising your game activites helps you keep organised and abreast of activities and decisions. It can be particularly useful for people whose actions impact other people to be able to go back and check things you have decided before.

- CV/Resume item. If your cv is very light you could put your blogging on there. Be sure it's a blog you're happy for employers to look at (eg no NSFW stuff) and that establishing yourself as an Eve nerd may be helpful to your application. (It probably does for a job in the games industry, it probably doesn't for a bar job). Just bear in mind that to most employers writing about a video game makes you a less interesting person, not a more interesting one.

How do you start?

Think of it like a diary but maybe a bit more freeform. Any time you're stuck "today I did this..." is a usually a good blog article. You can also post whacky armchair game design ideas or soapbox rants. The Blaugust requirement to blog daily is a good starting point because your writing will get better the more you do of it.

Frequent regular blogging is a hallmark of many of the most successful bloggers. People like Ancient Gaming Noob and (historically) Gevlon and Jester publish(-ed) pretty much daily.

Promote your blog by commenting on other blogger's articles and politely mentioning you have just started a blog. Don't be too pushy, I'd probably delete a comment that just pimped a blog without any interest in commenting on what I was writing about but I do look at commenters who take an interest in what I write.

There's a Eve blog sites collator, get yourself on that. There's also the My Eve section of CCP's official Eve forums.

You can also post your blog article as a link on /r/eve although you might get some rather brutal feedback.

I'm going to make what will probably be a somewhat half-assed effort to keep other writers company with this Blaugust initiative.  Not sure I'll write a post a day but ho hum.

Blogging tends to be both reflective and personal and proper journalism is less forgiving of either. Writing for someone else's website falls somewhere in-between.

I put out a piece on Crossing Zebras last week which sparked a somewhat hostile reaction on /r/eve for two reasons. The silly reason is that I was rude about Barcode Alliance, well blunt perhaps rather than deliberately rude. I thought they were over-hyped and some of them took great offence. They all shut up though once they lost their first match to the unfancied Japanese language alliance Samurai Soul'd Out.

The more significant issue is that some people felt I hadn't done enough background research.

Now here's the thing - people who do significant levels of background detail on the AT teams are usually spies working to give advantage to their alliance. The information they find is not for public consumption - it's an edge for their own team. Had I put the work in to track the pilot movements and sisi matches that other teams revealed I would not be using that information for a public article, I'd be my team's Master Spy.

Instead it's an appraisal based on past form and I got 12 out of 16 calls right.

Now this does highlight an interesting dilemma about the Tournament. Anyone who really knows their stuff keeps it private.

There are some exceptions: Apothne, Elise Randolph, Nashh are all focused on the event and the community rather than a particular team. CCP Fozzie has previously been knowledgeable and forthcoming although he's unfortunately become much less outgoing with the community since a section of it decided to blame him for the perceived shortcomings of the new sov system and try to get him fired.

So we're in a This is why we can't have nice things situation. The determination of the Eve community to be hostile towards content providers and obsessively competitive to the point where leading AT players would rather keep under the radar even if it kills off their tournament is clear.

There's no obvious route in for new captains. Where do you start?

I'll still write anyway but one of the things I miss from the days when we all had blogs and there weren't these professionalised sites was that readers were polite. If someone rage posted their comment would get deleted and they'd get banned. Truth be told it virtually never happened (except to Gevlon). Commenters didn't feel the sense of entitlement that perhaps shapes the modern Eve commentariat.
Posted by Stabs at 16:59 4 comments:
Newer Posts Older Posts Home
Subscribe to: Posts (Atom)