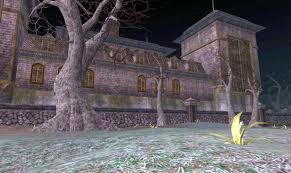 In MMOland Halloween has started and EQ2 offers several events. You can look them up on ZAM but I'd suggest not doing so at first.

The reason is that we are presented with an instance full of mystery and suspense that is utterly delightful to play "as the designers intended". A haunted house.


I spent a very happy very old school half hour in the Haunted House running around stuck, in a manner that used to be standard in old school adventure games. My friend, with whom I was on Skype, got stuck at the same point for 4 hours. Good old-fashioned non-optimised gameplay.

Here are reviews of it from Player Versus Developer and Yeebo Fernbottom's MMO Love In.
Posted by Stabs at 01:48 1 comment:

I'm thoroughly enjoying EQ2 but their Marketing department continues to marr the enjoyment.

This time it's a Catch 22 situation created inadvertently by the ongoing design of the business model.

I had purchased a month's Gold sub on an account. As this account allowed me to create all the non-free classes I made several. I also purchased a substantial amount of Station Cash so that I could unlock them once my account reverted to Bronze.

I posted on the forum, Smokejumper, Senior Producer of the game, posted to say I could fix it by subbing to Gold or by using some website. I couldn't find this website. Nor could the very expert Zam community manager for EQ2. Nor could the Senior Moderator for SOE. It didn't exist.

Ha ha, it gets worse.

I decided to pay for another month of Gold so I could at least get into the game and buy the classes. However when I entered the game and checked the SC shop character classes are not for sale - presumably it wasn't anticipated Gold level subscribers would need them.

I petitioned it and I got some half-arsed answer that there wasn't a problem since I was Gold now. Believe you me I sure as hell won't be Gold in a month's time.

It's a super game and I'm enjoying it but their Marketing nounce wouldn't fill a gnat's thimble. If I get too hacked off I could go and try Lotro for free - or could I? Nope, Codemasters still haven't released it in Europe. That particular debacle has lasted so long now that it's hard for people interested in European Lotro to have faith that Codemasters will ever get their act together - after all, they eventually passed the DDO ball back to Turbine after a year of dropping it.

Is it any wonder Blizzard is top dog? Sony, test out your systems as if you were customers yourselves. You can't keep asking people to endure account management hell just to play your titles. Codemasters, hire a minimum wage 17 year old with a GCSE in German to translate Lotro so you can get the game out. Or just push it out in English with an apology to speakers of other languages.
Posted by Stabs at 14:53 4 comments:

I've been building my EQ2E accounts with a view to having the ability to play it while not paying for the game.

EQ2 originally had 4 archetypes split into 3 classes each. Then each class split into 2 subclasses for a total of 24.

In my opinion there are few classes where it's worth playing both subclasses. They're too similar. Even ones that sound rather different actually play pretty similar. For instance you'd think Ranger and Assassin are ranged and melee - but they're not, to dps effectively at end game on a Ranger you need to stand in melee range so you can use both melee and ranged attacks. And the Assassin has a number of powerful ranged arts.

Another aspect of using 3 silver accounts is that race packs come as a set of 3. 3 character slots + 1 race pack gives you the option to roll 3 different non-free races on your silver account.

In addition I've set up a private guild to get around space and gold storage limitations.

So here's the plan for 3 accounts worth of characters:

I also have some Bronze mules, mainly as a way of sorting inventory.

I've decided to omit two of the crafter professions from my scheme. Weaponsmith makes very little that Woodworker doesn't cover. There are wooden versions of most types of weapon - Mage staff, Priest hammer, one handed Fighter, two-handed Fighter, etc. And Carpenter is mainly for the home decorators, for people like Saylah who have an artistic eye and a love of design.

I've got two open slots so quite easy to round out the selection if I decide I'd like to try something I haven't got.

So how much will all this cost?

I inherited 1100 Station Cash on my old EQ2 account and have dipped into Free Realms on the others, you get 250 for setting foot in the game.

So after the free points it's costing me about £58. If I find myself in the position of wanting to raid I'll probably go Gold for as long as I'm actively raiding for another £9 per month.

That's a pretty good deal for 5 years of EQ2. If I had wanted to I could have gone to EQ2 Live and had less restrictions but those same 5 years would cost me almost 10 times as much (about £540).

And I've actually spent a little more than the plan as I tried Gold for a month in the process of figuring everything out.

There's a truism that people who spend money in a free to play game spend more than if they had just subbed.

I also like just having it there if I want it. I don't have to argue with my conscience about whether I'm allowed to try Minecraft or free Lotro when it would be wasting my EQ2 sub to do so. I'm finding subs these days to be something of a straightjacket.

I planned this and implemented a lot of this before the recent announcement that you can buy extra character slots. I think if I were starting now I'd do a 7 slot Silver account with private guild. Slightly more expensive but any upgrades such as Sentinel's Fate or Gold would apply to all characters.
Posted by Stabs at 20:27 5 comments:
Newer Posts Older Posts Home
Subscribe to: Posts (Atom)