As I explained in my last post, Magic Online is seasonal. I finished a league today and as I found that the entirety of the cards I opened, 6 packs worth 24 tickets unopened, sold for less than a ticket to the tradebots it's time to stop playing as the game is now uneconomic.

I could play on if I wanted to but with the opened cards being miniscule in value I'd need 6 wins per league consistently. I've gone 5-4 in my last game and 6-3 the one before that so I can't expect to do so. Without card sales propping up the prize value a 5-4 would cost about $5 and 4-5 would cost over $10 with 6-3 about break even. I've never gone 7-2.

I did 5 leagues of 9 games each this season all in the Friendly Sealed format. I never opted to pay for more cards to strengthen my deck. I went 6-3 or 5-4 every time making a substantial profit particularly on the early games when the cards were new.

I had a ton of fun, I really do like MTG as a game, but I'm quite happy to wait 3 months now till the next release then splurge again. Next time I'd like to get more leagues done in the first couple of weeks, it really does feel like collecting free money.

I'm becoming a lot better at baiting out the opponent's killer move and trumping it. I deliberately set up situations that might tempt him/her to use their best removal spell or combat trick when I have open mana and a counter card in my hand that will result in a 2 for 1 play. That's very satisfying.

Being self-analytical my psychology is quite weird. I have about 700 tickets, worth about $700. I only play when I think I'll come out ahead and I'm usually correct on that. So each season I end up richer. I can afford to play now and lose money simply because I've such a great stack of tickets. However I don't want to and it's hard to explain why. I really like the game, it makes no sense to have more tickets in the system than I will ever use. Logically I should just play on, losing about $5 per league (about 50c per match) because this wealth is useless unless I spend it. I have the unspent wealth to lose about 100 leagues even in the dry season. However I'm averse to. Loss aversion? Is this why real world billionaires keep piling up the billions when there's no longer anything left to buy? I just don't fancy the idea of playing what is essentially a gambling game now the odds are no longer in my favour even though I'm only risking meaningless game money. I believe Dan Ariely would consider me predictably irrational.

Well it is what it is. I have a new corp and a new adventure starting in Eve Online, time to shelve MtGO for the season.

MTGO is a strange game for me because it's seasonal. I don't know if I've ever played a computer game so strongly seasonal. There's a best time to play it and times when playing it is economically challenging. I mean, you can play it but it costs more, you get beaten more and the thrill of novelty isn't there.

Here's how the game works and how I approach it. A new set is issued about 4 times a year. The set is available in physical form only over a weekend known as the Pre-Release weekend. Then the game is released online on the Monday.

That Monday and the days immediately after the game is full of casuals who only return at this particular time in the cycle as well as both casuals and veterans who don't know what the new cards do. In addition many of the new cards are highly sought after by people who play constructed.

These conditions (mediocre players and high card prices) degrade rapidly, hourly, and then continue to degrade more slowly over the life of a format. The people who are playing in a format's final week will tend to be the most dedicated players.

MTGO is an expensive game with that expense defrayed by prizes. Many formats also allow you to keep the cards you open which is another way to defray costs. It is a very good game, better than Hearthstone, because you can dick with the other player during their turn (or anticipate them dicking with you and trump them). It' can be supremely satisfying.

Players have a concept of Expected Value which is calculated from your win rate. This calculator allows us to work out whether we're likely to be ahead or behind.

I'm a decent but not great MTG player. (Limited Rating 1708). By stacking the odds I'm able to come out ahead (known in the community as "going infinite").

Here's how I finished my last league, a set of Sealed games I went 6-3. 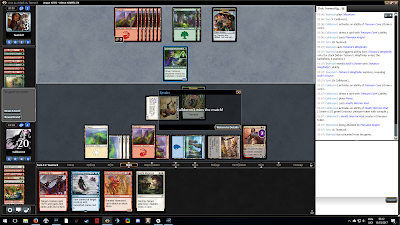 I'd very much recommend playing limited format MTGO and I hope this helps some of you find your feet. Beginner's guides are on the sidebar of the MTGO subreddit.

The next Limited format starts in January so now would be a good time to pootle around for a couple of months learning the UI and the game mechanics and play some beginner games to prepare yourself for then.
Posted by Stabs at 03:37 No comments:
Newer Posts Older Posts Home
Subscribe to: Posts (Atom)