My evil campaign against Gevlon's minions of justice was doubly foiled yesterday. First the news broke that Darwin's Lemmings would not be deploying to Oasa, foiling my cunning plan to surgically remove their plasma pocos and buzz them daily with interceptor gangs.

Then I fell victim to my own favourite tactic as a MOA interceptor gang entered my new ratting system. With hindsight I realise this system has a flaw - it's very large. I had just started a long warp when the first neut appeared in local. By the time I landed there was an interceptor in the site already. I got pointed. I aligned out and tried to kill inties with Precision Cruise missiles and a gecko. Oh for a rapid heavy missile fit and a mobile depot! I also had a Domi alt and we had a raging battle - myself and my alt versus around 18 interceptors, funded by Goblin trading profits.

I drew blood killing three of them but their damage was too much for my overheated reps and my mjd trick was unsuccessful. Bye bye to my shiny new Rattlesnake! To add injury to injury they even killed my pod. They also got the domi 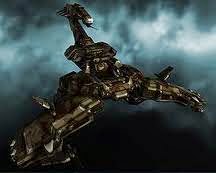