In Eve Online Empires are controlled by structures. There are three types of sovereignty structures thatcan be placed in a system to enhance ownership: a station (which can be conquered) a territorial claim unit, and an infrastructure hub or ihub. (The latter two are destroyed after being successfully attacked which creates a vacancy for an attacker to place a new one).

Defending one of these is hard work. This is why The Imperium, despite a resolute defence, is in so much trouble. To keep what they have they have to win every event. Saving some, while losing others, weakens their hold over their space.

In a normal sov war the attacker will make a couple of timers and the defender has time to organise an effort to win those timers. The Allies have made and continue to make so many timers that it's just not possible to contest them all.

The awesome Lucia Dennard has created a World War Bee section on her Timerboard site. Here's what it looks like at the moment:

So 120 separate capture events, each one requiring several more command nodes to be entosised  than the enemy can manage if contested.

Let's do a little roleplay now. Imagine you're the Imperium Sky Marshall. You have two bloc FCs currently online who can command any type of fleets (although escalation to a full commitment of titans requires the Coalition Leader's agreement), 5 Full FCs trusted with any sub cap and 15 Skirmish FCs (rookies who can command small gangs of frigates and destroyers). How do you spread your forces to protect everything?

Well, you can't. You don't have the manpower to do so and against the locust swarms you're only able to win here and there while losing ground somewhere.

Now let's consider the Empire that needs to be protected. 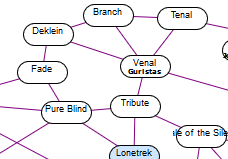 The heart of The Imperium is the Goons home region of Deklein. Vale of the Silent, 3 regions away, has already been abandoned. It's just too far.

The Imperium's main staging system is in the unconquerable low sec region of Lonetrek. On the one hand this is clever because just in case they lose all their sov space their stuff can't get trapped in a hostile station. On the other hand, as you can clearly see, it's far from the northern parts of their empire.

Making things worse is the fact that all of Venal and 2 crossroads constellations in the middle of Pure Blind are NPC Nullsec - unownable and currently infested with The Imperium's enemies.

Now to better understand null sec strategy we now need to go deeper into the game mechanics than the simple 2D map. Null sec strategy is heavily influenced by Light Years - units which determine the distance ships can be teleported. Capital ships can teleport, subcapital fleets can be teleported by titan bridges (or if they're all cloaky by Black Ops bridges) and can also use a special internal highway, a network of jump bridges that let defenders move more quickly within the borders of their empire.

Here's the range a titan can directly bridge fleets to from the main Imperium base at Saranen. That's fairly pitiful, barely half of a single region.

10 LY is a range that's still realistic, a titan bridge then either waiting out jump timers to grab a jump bridge or taking a few gates. Here's 10 LY from Saranen. That reaches everywhere in Pure Blind, most of Fade, half of Tribute and a small corner of Deklein.

That's not enough. Nowhere near enough.

So what's happening is that there's effectively a separate northern battlegroup, staging out of UQ9, formed by 3 alliances: Fcon, Razor and The Initiative.

And that group is losing badly. Currently most of Initiative space in Tenal has already been taken and about half of Razor's space is reinforced, likely to be lost in a couple of days. In a sov war as each alliance loses its territory the line membership becomes more concerned with securing personal assets than with forming for the collective defence. This is tremendously time-consuming. When I left The Bastion it took me 3 weeks to move and that was in peacetime! No wonder then that when Vale was abandoned the participation rates of Lawn and The Bastion dropped off a cliff.

So in the North, Tenal will fall soon and then Branch. The heart of the Empire, Deklein, is being encircled as if by some galactic Schlieffen Plan.

One of the creative ways that The Imperium Sky Team has come up with to cope with these enormous distances is a doctrine called Sword Fleet, based on fast warping interceptors. The problem with that is that Interceptors aren't very brawly. Still they work well in large numbers if the enemy splits up and isn't in anything especially tough.

Today one of the things the Allies have done is kill ihubs. When you kill an ihub the jump bridge associated with it stops working.

This is a map of The Imperium jump bridge network at the start of the war. Here it is in list form.

See the section near the top? A healthy sov system shows either T-I or T-I-S. In 3 of these systems the ihub has been killed by the attackers.

Actually, it's a lot worse than it looks because in systems where the ihub was killed and then replaced by the other side or where the TCU was killed the jump bridge is still snapped and unusable. The defensive superhighway is in tatters. Application of any force more powerful than a group of interceptors anywhere far from Saranen is becoming increasingly difficult.

So to sum it all up: The Imperium is going to lose, they know this and have planned for this which is why they base in low sec, defence will get more difficult by the day and they can't really begin to reconquer anything until whatever perfect storm of emotions made everyone else in the game decide to come and kick them in is resolved.
Posted by Stabs at 20:58