The critical ihub at ancestral Goons homeland system of VFK was destroyed just now, crippling the defences of the famous solar system. 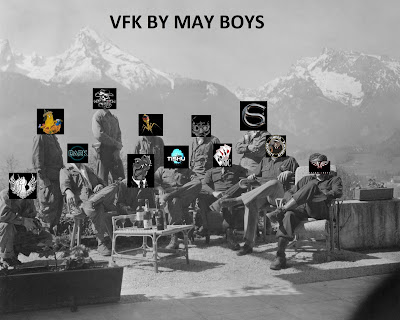 Horde formed a fleet to take VFK, in fact the fleet was even named VFK BY TODAY. The FC then led us in a circular dance, while a 100 man Goon Hurricane fleet stalked us. We dragged them down to the key gateway system of EC- which was also contested this morning. There we entosised for a while as we were ahead of the Goon 'canes.

Meanwhile other allies took VFK with the canes too far south to affect the outcome. Chasing the obvious Horde fleet had pulled them out of position. We held on in EC- against a massively superior force playing cat and mouse before finally the Horde FC decided to go out in a blaze of glory. Not long after superior allied forces came down from the north, perhaps to keep the contest for EC- open and to avenge another fleet of Horde Thrashers.

If you're a newbie industrialist you should be able to make some decent money mass producing the Minmatar Destroyer. I doubt it will be the last fleet to be sacrificed in this conflict.
Posted by Stabs at 07:36