Deklein is in a somewhat odd place at the moment. The people who live there are waiting for the axe to fall and putting up quite a spirited defence against the lead elements of the MBC.

There's no doubt that the main thing blunting the edge of our assault is simply the vast amount of space needing to be absorbed. 6 regions outside Deklein are basically being mopped up which takes a lot of manpower.

The Mittani's decision to move all the defensive timers to AU TZ, otherwise known as Fuck You TZ, hurts participation in the capture events on both sides. From the attacker's perspective the Goons are desperately stretched at that time. This morning I freeported DKUK station with a tiny Waffles gang with help from CO2 friends while the Imperium was more concerned with contesting critical Pure Blind timers. Hat tip to the determined Bastion pilot in a Crow who was determined to contest it but eventually conceded that he couldn't do much without backup.

However later on a small combined MOA and Waffles force was shut down by a comparatively strong showing by The Imperium for the DKUK ihub timer (40 strong Caracal fleet plus a separate fleet of 20). A later attempt by me to ninja a timer in a bad ADM system solo was dealt with peremptorily by Danish Goons who blew up my entosis alt then chased my main all the way to Pure Blind.

Ratting has ground almost to a halt in Deklein, jeopardising the crucial ADMs which make the region hard to assault. Yesterday I toured Deklein in interceptors, finding that each system had someone from Pandemic Horde in, enthusiastically typing rubbish into Local chat and trying to engage the sullen Goons docked in their stations.

Tomorrow sees a set of timers for the critical system of YA0. I estimate there's around 50 trillion isk of assets in that station. Tomorrow morning my time (and Eve time) there will be assaults first on the ihub, then on the TCU, then finally to freeport the station. If the station is successfully freeported the final timer will come out Friday morning and the prospect of the richest trade hub in nullsec falling to its enemies may become fact. 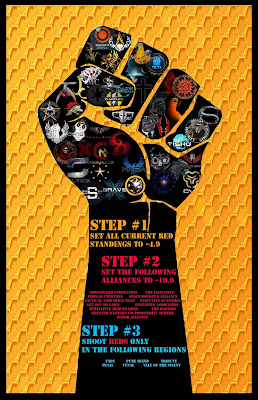 What can you do to help?

Come to YA0 tomorrow and Friday. The headshot is lined up, let's not miss.

Fight in Deklein. In WW2 the panzer columns drove around their enemies to the more vulnerable rear areas, cutting troops off from support and gaining massive territory as fast as the tanks could trundle through the countryside. There's no need to mop up in Branch and Fade when the alliances that live there have gone (unless you're more worried about your friends seizing space than about defeating Goons).  Don't get bogged down, push forward, move staging systems closer to the front and let's get the job done.


Support timer events. When things come out of reinforced mode we need to win as many of these timers as possible. This link shows the Deklein timers.

Turn off station services, especially cloning. As the Goons try to evac their stuff they rely on cynos to move capital ships and particularly Jump Freighters around. You can entosis station services at any time.

Kill cynos. Don't forget to loot or blow up the wreck.

Shut down ratting and mining. Don't let them push the ADMs up.  One system in the Testagram managed 3341 rat kills in the last 24 hours. Come on Test where are you? Don't you want your ancestral home back?