A Golden Path for a Greedy Goblin

In Frank Herbert's Dune a revolutionary messiah conquers the Imperium and takes over the universe. In the sequels to Dune his son becomes immortal and rules as a God-Emperor, taking humanity on a delicate path between warlordism and anarchy, the sole true route towards a positive future.

My colleague in blogging, Gevlon Goblin, is in despair. Ironically at his moment of triumph - just yesterday I saw someone comment "Gevlon must be so happy." 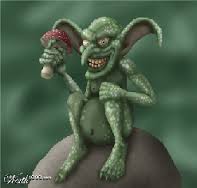 Gevlon has leapt to the conclusion that PL has backed Goons into a corner as a bargaining chip, a way to secure for PL the prize of New Jita, an XL Citadel that gets adopted as the new player run market hub.

I do agree that a player run hub will begin replacing NPC hub trade when the Citadels patch hits at the end of April and NPC taxes rocket upwards.

I've seen some people state that they don't see why the hub would move. One word: plex. Since plex can be activated from anywhere and never need to be moved, they will get sold in the hub with 1% tax, not the hub with 6% tax. And once the plex economy moves, the rest will follow.

I don't agree that PL is plotting a high sec market hub, at least not on their mains, nor supported by the alliance as a whole (although individually I'm sure many people there make their money from trading and are keenly following developments and opportunities).

Here's my challenge to Gevlon:

He has the market knowledge to succeed. He has the mercenary contacts and killboard expertise to be able to hire effective high sec troops. He has a track record of achieving the remarkable.

We're seeing in the North that when it comes to getting shit done in Eve isk just works. The Grr Goons feeling helped - people were very willing to take the isk - but people were paid to kick it all off and are still getting paid. The amount of money Gevlon has given away over the last couple of years would pay for a spectacularly effective mercenary team and if they aren't enough Gevlon has the ability to grind out billions more to hire extra mercenaries.

Change is never a reason to quit. Change is an opportunity to make your enemies quit.