The battle pet minigame uses a rock paper scissors system to advantage some pets against others (which in turn will have an advantage against a different type).

Here's a pet called an Anubisath Idol, currently the highest rated battle pet in the game.

He is bad against undead since they passively get a damage bonus against him, bringing down the power of this pet in that match up. If you're new to battle pets and are running around the wilds battling everything rhat squeaks this guy is great because there are very few wild undead pets but hundreds of critters.

Most battle pets have attacks of the same type as their creature type. So the simple way to build a team is to pick pets that counter the type both on attack and on defence.

It also has some attacks that do bonus damage against Humanoids:

So in general this is a very effective pet against Humanoids.

This system is how the site wow-pets.com produces its counter pets. This is a pretty useful list for this simple strategy. When I fly around doing my dailies usually all the prep I need is a glance at wowhead to see Flier, Beast, Aquatic, then to throw a simple mismatch in slots 1, 2 and 3.

However it's not foolproof and it's not complete.

Off type is the only way to get that kind of double whammy.

To optimise against a Cogblade Raptor you want a pet that is type Flying (less damage from Beasts) with Elemental attacks (bonus damage against Mechanical).

You can use this search engine to find your mismatches. Currently it finds 30 pets that counter Cogblade Raptors.

So complex mismatching is doing the research or starting then fleeing a pet battle to check exactly how you should counter a pet. Addons help a lot. I'm not ready to recommend an addon yet but one that shows the opposing pets abilities is what you need.


What else wins pet battles?


- Passives. Each type has a passive and some are powerful every time and some are useless except in certain magic. For example Critter passive counters stuns and Elemental passive counters Weather. Most of the time those passive do nothing. The Mechanical gets perhaps the best passive, coming back to life after you kill it.

- Synergy. The Cogblade Raptor has an ability that debuffs the opposing pet so that for 5 rounds it will take extra damage. This ability is balanced around 1 attack per round but the Raptor's main attack hits 2-3 times so long as it goes first which makes the debuff absurdly powerful. The final piece of the synergy is an ability that gives it a speed buff to help it go first against fast pets.

- Counters. I'm using counters in a different context here to mean abilities that counter or mitigate against opposing abilities. Dodge is pretty good against an ability that hits hard but has a long slow wind-up. Against the AI you can figure out when they will use their abilities and time your counter ability appropriately.

- Power level. Some abilities are just strong. The Nexus whelpling has a baseline attack that does 325 damage (at level 25). It also has an ability that does 325-487 with a bonus if the weather is Arcane Winds. This is just good, clearly better than the baseline before you consider the synergy. 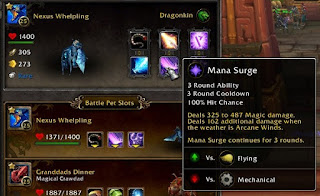 You can find overpowered pets using the rating system here.

- Stats. Each pet gets a bonus called its breed and the bonus is lower if it's multi-type. So Power + Power is usually a better bonus than Health + Power. Some bonuses suit certain pets and certain matchups. Speed for instance is only useful at the tipping point where it makes your pet faster. Being 100 faster is functionally the same as being 1 faster. In general pets that hit hard probably benefit from Power and pets that outlast benefit from health. (Eg the Magical Crawdad has a heal for half its hit points which is better if those hit points are really high).

- Speed. It's worth saying that going first is really good, especially on high damage pets. My Cogblade Raptor sometimes kills an opponent pet before they get their third go. So it gets 3 rounds and the other pet only gets 2, it's like a 50% damage reduction from it not getting the third round.
Posted by Stabs at 09:17