A number of my ship fits have been inspired by radical ways in which next week's expansion will be overhauling the various ships. With the Blackbird it's not actually getting changed very much. So you may be wondering why I have picked it to write about as one of my Retribution choices.

Simple answer: it's simply the best. Better than all the rest. 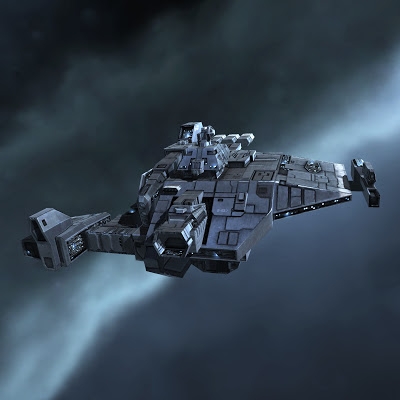 Retribution will see a surge of interest in Tech 1 cruisers and although this one won't be changing much it's an amazing boat - not just powerful but also very interesting to fly.

Blackbirds basically work like this: you target and ecm jam selected targets that are NOT the primary target of the fleet to cause them to lose all locks and be ineffective for 20 seconds each time you land a jam. You can jam powerful ship up to capitals (but not supercaps) and so because they are so good and rather fragile enemy Fleet Commanders usually primary Blackbirds first.

Blackbirds are also very quick to skill into. This means that new players are often encouraged to fly them as they are much more powerful than any other ship a player could use with less than one month's training.

Because they're primaried and because they're often flown by newbies they have a somewhat undeserved reputation of not being great fun to fly. Strong, yes, but who wants to always die in the first few seconds of a fight? However if a player is careful and cunning and fits for extreme range then a Blackbird that doesn't mind running off then coming back then running off a lot is both extremely powerful and very survivable.


2 Warrior IIs (or Salvaging Drones if you prefer)

Swap outs of ECM modules in the cargo hold so you can adapt when given intel about the enemy composition if there's a chance to re-fit.


The key to playing this ship in gang or fleet combat is to be independent. The position you want is about 80-100 km behind your fleet and at least 80 km away from the nearest enemies. If your FC warps his fleet into a rival gang, cancel fleet warp and warp to him at 100 after he lands. Prepare terrain by making perches where you're likely to fight, eg stargates, stations. Elude interception by bouncing off celestials that are at different angles. Imagine a solar system like the one we live in. And you have a spaceship fight at the earth. So warp to Saturn then warp back at 100, then if enemy fast tackle is closing in on that position warp to Mercury then warp to your FC at 100, putting you 150 away from the tacklers who now find themselves on the wrong side of your fleet to come and tackle you. Next time you might warp off to Jupiter so they see you go that direction but rather than warp back to your FC from that side you warp to Mars so that you come in at an unanticipated angle. You survive by always immediately warping whenever you take damage or risk being tackled as you can operate at great distances from the enemy. This is particularly true if most ships on the field are Tech 1 cruisers.


With perfect skills the fit jams out to 117 km. (That's in falloff but losing a few percent isn't a big deal). If you don't have the skills to jam out to 100 km take some tank off and replace with Signal Distortion Amps.


Now you might be wondering about the salvage modules in the high slots. They're there because there really isn't anything else useful to fit - if you never are within 80 km of an enemy you are out of range to shoot him. Putting guns on would just get you killed, this fit is all about running off when the enemies try to kill you then warping back at a useful distance and immediately aligning to prepare your next instant escape. And of course hoovering up the field after a nullsec pvp battle is exceptionally lucrative.


There may be times when you feel that all you're doing is landing on grid then warping off again. Even that is very disruptive to your opponents as they have to break off from what they were killing (perhaps giving your logistics a chance to repair it back up again) to futilely shoot at you only to see you escape. It's quite likely they'll get fed up or distracted and let you land and get some jams on after a while.


So the Blackbird - a great ship to fly in the Tech 1 cruiser battles we'll be seeing soon in Eve.