Sometimes in Eve you just need speed. This fit is a throwaway tackler, designed to be used in situations where you perhaps outnumber your opponent but they have the edge in quality. Particularly useful against kiting ships like vagabonds cynabals and tengus which are confident of being able to out-pace you. 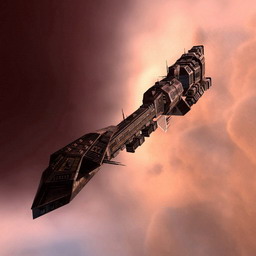 Top speed is 3211 m/s. Overheating the MWD usually adds at least 30% so over 4km/s with that in place. (Skirmish links can also be used to give a pack of these significant additional speed and propulsion jamming range). It's virtually untanked, a measly 16,192 effective hit points. It's not designed to solo, it's designed for blobbing opponents who feel they are flying ships which counter blobs. The fastest Stabber only has to survive long enough for the second fastest Stabber to catch up and establish secondary tackle.

Any ship tackled by one of these is in trouble. He'll be webbed (-60% speed), scrammed (can't warp off, use MJD or MWD) and will get shot neuted and nosed. The fit does a respectable 260 dps, enough to add up if tackled by several of these. Each neut destroys 180 cap per 12 seconds and the nos sucks up 9.6 cap per 3 seconds if your cap is lower than his. That's not really enough to put most pilots in trouble if tackled by one of these ships but will ruin someone's day who gets tackled by several.

It's fast tackle but much more sturdy that tackle frigates usually are and packing a medium neut too.

This can be taken out as a gang of just these ships. They're quite survivable as they can burn out of range of most things that can tackle them they still move 478 m/s even when scrammed and anything scramming you is likely to be webbed and scrammed several times over. This makes it a very good training ship for new players as the ship lasts long enough that they can try out different escape methods (eg burning back to the gate, burning out of point range etc).

They fit very well with any fleet doctrine for large fleet fights as long as they hang back until just before the enemy decides to warp out. All big fleets love fast tackle and it's very common that the fast tackle all dies early in an engagement.

If you want to take out a mixed cruiser gang they pair very well with scythes and ewar cruisers as the long range of those cruisers allows them to participate where other cruisers wouldn't keep up.

Low skill notes: tech 1 modules are absolutely fine. It's ok to be a little slower than the maxxed out people. If short of grid drop the nos and the neut.

These can be made and fitted extremely cheaply as part of a newbie free ship programme.
Posted by Stabs at 03:32