Signature this, signature that. If you follow discussions of fleet doctrines that's all you hear - sig tanking sig tanking yadda yadda.

There's a specialist type of ewar that blooms other people's signature. And virtually no one uses it.

Target painting can substantially increase the signature on another ship. Let's do the maths on what a couple of ewar-linked Hyenas can do:

There are no rigs for paint effectiveness.

That means maximum sig bloom is about +216.4% (or a little higher with Faction paints). A standard 125 sig cruiser is bloated up to 395.5, very close to a standard unmodified battleship. On a sig tanking ship like a Tengu this makes it much more effective to apply damage from a number of weapons (ie any weapon whose damage would normally be reduced by the Tengu's sig radius, particularly but not exclusively battleships).

Blooming sig radius does 2 things - it means ships lock up the target faster and it causes many weapons to do more damage.

It's the first one that concerns FCs. By making it so the other side's logistics can lock up the target quicker it means reps land faster, saving many primary targets.

This is received wisdom and because of this we rarely see Vigils and such ships called for in Null doctrines.

That's a simplistic one size fits all approach that is not correct in every situation and which can be improved upon with good play and good communication.

- tackle may land, FC will call "kill dictors and inties." Often no enemy logi is on the field yet. This is a perfect time for paints against these tiny sig radius tackle ships.

- fleets square off and start exchanging primaries. FC has several options here to get kills:

2. Primarying and sustaining. Fleet will start shooting a target pushing it down into low shield and then reps will start, It will then either slowly creep back up or continue creeping back down. In situations where the logi have clearly already locked the target up it may be worth applying paints to a target they're struggling to keep up as the extra damage will kill it.

4. Disengaging. Enemy fleet is trying to escape, logi have either already left or just aren't that worried about rep broadcasts. Paints are great.

And the availability of paints adds a new one:

This is some pretty high level ewar piloting - it's not suitable for the 3 day old newbie in the Vigil without intensive training. Your paint pilot is now making a flurry of decisions, receiving commands from FC and logi anchor, following both offensive target broadcasts and friendly shield broadcasts.  Ideally your painter will be able to read a fight like a FC so he will know whether to paint or not without waiting to be asked.

There's also the possibility of defensive painting. If paints are bad surely then painting our own guys is good? Well the painter pilot could follow shield broadcasts from friendly ships (or better still spy on their fleet) and paint up the primaries for our logi to lock them up quickly. This would be especially useful against cruiser doctrines that are not doing significantly reduced damage due to sig. And in any event you would only run one cycle of paints - enough to help logi lock him up quick but not maintained to keep enemy dps high.

Here's some graphs showing the effectiveness of sig when a standard nullsec tengu is shooting a target:

First something huge as a baseline to see how the ship would apply its damage to a very large target where sig is pretty much a non issue. 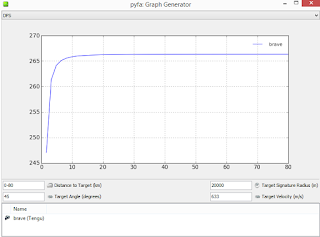 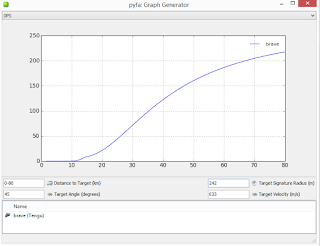 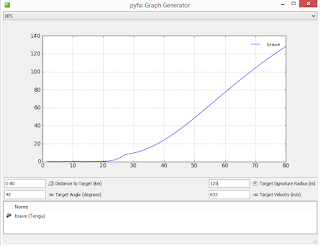 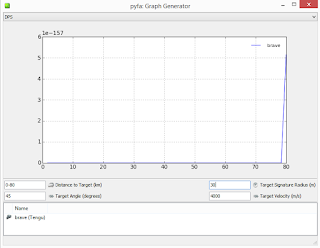 Let's now look at the graphs for Caldari Navy Thorium: 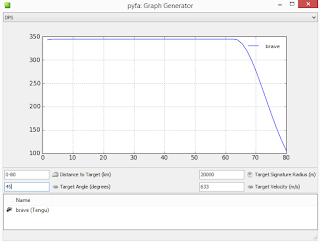 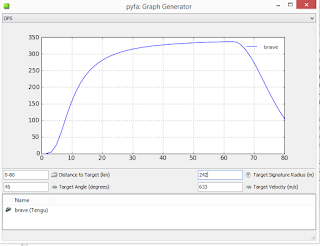 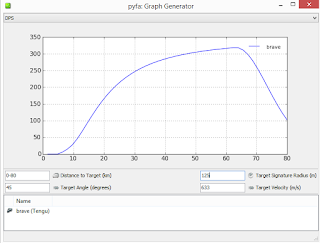 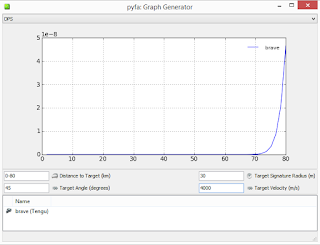 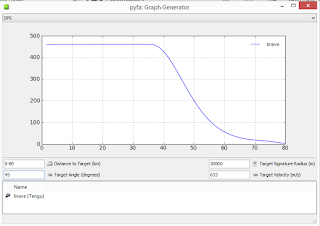 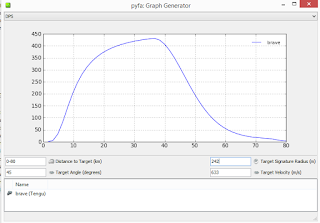 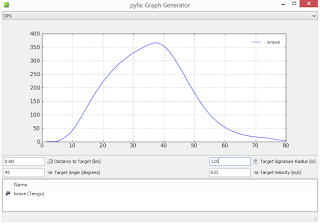 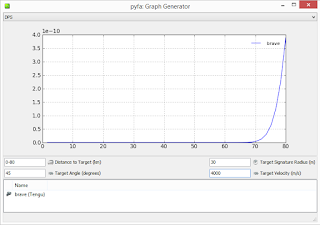 We can draw some quite interesting conclusions from these graphs:

- with Spike M target should almost always be painted even if it helps their logi, the tracking penalty on the ammo type really hurts.

- against small fast stuff always paint, it's hopeless trying to hit them otherwise.

- with Faction ammo right at the edge of optimal paints add very little to these medium rails against cruiser sized hulls (other than helping enemy logi).

- with Faction ammo at under 20km always paint.

It should be possible to beat an enemy tengu fleet that isn't painting by coming in under its guns, eg orbit their anchor at 15km and primary the furthest tengu, painting it up for better damage application.

Shout out to the wonderful Eve application pyfa for its fitting tool.