Ermor is this universe's version of Rome and they seem like a good place to show readers the game. Every civ game has some sort of Rome like civ, (or actual Rome!)

So to start with I'm going to design my god.

I started by thinking about what high level spells I want to cast. While it's possible to cast high level spells with units found in game it's much easier to simply design your God to be able to do it if that's how you want to win.

If I wish to go for a big epic game-crushing spell I also want that spell to suit my empire development so it will help me reach the point of being able to cast it. So because most of my mages do Fire magic I took a look at the list of ritual Fire magic on the very helpful Dom5 Mod Inspector site. 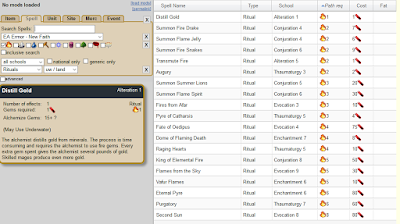 The list is sorted by Path req and the notable spell, at the end of the list, that requires very high skill is one called Second Sun. Sounds suitably epic, can I win the game by casting that?

Let's take a look at it. 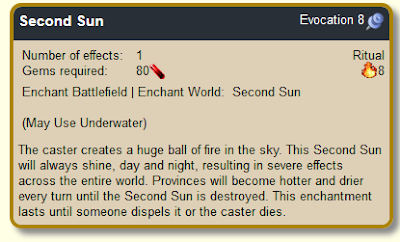 Well that doesn't sound great for me as my Empire is based on human people who would not benefit from such radical global warming. This might be good with a different race but no, I don't really want to cast this and it's certainly not a win condition. (If only I'd picked some sort of magma-born civ instead....)

Looking through the other Fire rituals and also the Arcane rituals I don't see any game winning spell that I'd want to base my whole strategy around so we can go magically wide rather than tall. I decide to make a Rainbow Mage, a Pretender God who is a bit good at everything but excellent at no magic path.

This means I need to pick a Physical Form for my god that supports this by having its New Paths cost only 10 god creation points. Preferably a Physical Form that gives my civ a discount. 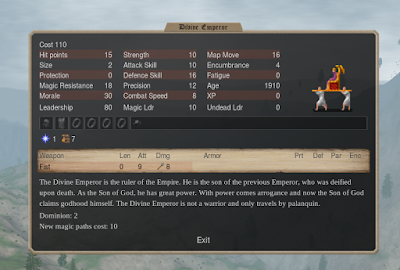 He's a bit rubbish looking compared to the many powerful monsters and titans I could have picked instead but we can turn that to our advantage by using a strategy where it's not about having your god physically present for fights. If you watched DasTactic's primer video where he makes his god a dragon and sends it around soloing whole armies this is the exact opposite strategy.

On the form for creating my Pretender God I check the box that says Imprisoned (gain 350 points). I then take all the magic schools to 3.

There's a hidden feature here that wasn't obvious to me before I stumbled upon it by accident. Normally you have to take a school to 4 before it adds free special Bless powers to the deal. However if you take all 4 of the left 4 paths (Elements) or all 4 of the right 4 paths (Sorcery) it allows you Bless powers at skill 3.

Taking 8 schools to 3 then gives you an enormous 24 points of Bless abilities to add to your God's abilities. These will be active when a unit which has the Sacred property either a) has the Bless spell cast on it or b) is fighting alongside the Pretender God. There are a couple of other situations where a Sacred unit will get Bless active, including magic items.

I design this to add a ton of core stats: +1 morale (automatic feature of all Blesses) +2 attack, +2 defence, +4 strength, +10 shock and nature resistance, +2 magic resistance, units will carry on fighting until -6 hit points, +1 extra hit point

That's a lot of buffs!

Next I decide to take an abusive level of Dominion. Dominion is the religion stat, it affects how quickly your religion passively spreads, the cap on your recruitment of sacred units and can overwhelm belief in gods with weaker Dominion in the provinces surrounding my empire. It gradually "terraforms" the lands to my scales which can make provinces very difficult for a civ that likes different conditions. There are several advantages to fighting on "home turf" so having this high means that when I fight people I can usually fight them in my Dominion which is worth a small morale boost for me and a small morale malus to them.

Lastly I have enough to take one Scale. Scales are measurements of how productive your lands are and you can go negative on one aspect to free up points to buff something else. I decide I don't want to tinker with the baselines and simply put a point into Productivity which will help me recruit horsemen and armoured troops. 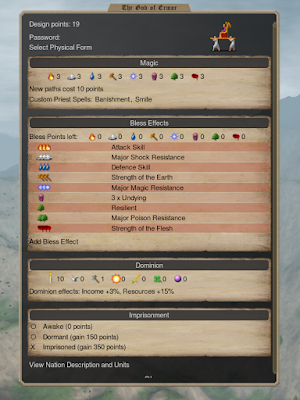