Mikal has decided to organise a regular frigate tournament and the first of them started last night.

I won with a rail Tristan fit. The tournament limits drones to Tech 1 only but even with T1 Drones the Tristan is still a very strong ship.

I designed my fit to be a little deceptive. While it applies from range reasonably effectively peak damage is from quite close (probably 9km using Antimatter is my best distance after taking tracking issues into account).

I played the Tristan by using a simple beginning of Keep at Range 30km and peppering them with Spike (30 dps). From there I'd assess whether they were comfortable with long range in which case I would move in, web them and switch to antimatter or Javelin high damage ammo or if they couldn't hit me at that range just sit there plinking away. 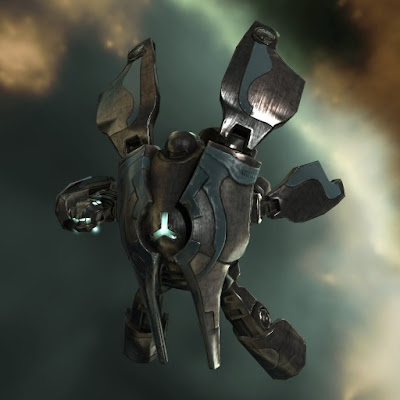 My first game was super close. I played Jozzer. He used a rail Incursus which was doing decent damage at 30km while laughing at my pitiful rail dps. I decided to rush in which led to a nasty close range brawl where we both overheated everything and just hoped. He blew up just seconds before I would have, giving me a win in very low structure. https://zkillboard.com/kill/49126706/

Here's the bracket. http://challonge.com/bravefrigtournament Note that there's a mistake. After my match with Kal Nour his name was put forward but in fact he wasn't able to stay around for our game so I got a win in my second match by default and the name Kal Nour should read Callduron for round 3 onwards.

My next game was against Dsching who I consider to be a very strong player. It was Tristan v Tristan. I think however he misjudged his fit. He was running 2 armour reppers and a neut with no cap modules or rigs. I just don't think that can work. (By contrast I was running just one repper and still had a cap booster). I did my trademark plinking from 30km which forced him to send in his drones then I rushed in for a kill, keeping a little out of his optimal blaster range and got a pretty safe kill. https://zkillboard.com/kill/49128937/

My next opinion was minion Kanjus who brought a very respectable light missile Kestrel. I moved to 30km to test how he played and BLAM: I got slammed halfway through my shields in the first volley. However missiles do the same dps close as they do far and with him having only an afterburner I had total range control. I moved in close, webbed him, used Javelin high damage close range ammo and overheated everything for another win, albeit not as comfortable as I would have liked. In fact I got the pvp shakes quite badly in this from the adrenalin rush and was physically shaking a lot. Really good fight, Minion. https://zkillboard.com/kill/49129226/

And that was the end of the winner's bracket, I was the last remaining person with no losses yet. And so I watched a brutally competitive losers' bracket play out to decide who I would play in the final. I had the security blanket of knowing that if I played the final and lost it would go to a rematch between the same two finalists because of the double elimination rule - I couldn't be eliminated by a single loss, not even in the final.

The losers' bracket was superb with great skill being shown and a really diverse meta. Breachers, Executioners, Merlins, all kinds of ships in addition to the popular Tristans. The outstanding player was maydNNN who flew a very fast light missile Breacher. He faced quite a few opponents with drones and was simply too quick and skilful to even get touched by the lumbering T1 light drones. He won several matches by taking no damage and scoring some light damage on his opponent and getting the referee decision. He attracted some enthusiastic German support and went on to represent a strong German contingent of participants in the final against me.

Germany may be the land of crystal spun castles but sadly the final was no fairy story. I chased in to my opponent doing some light damage with spike as I approached and setting drones on him. Crucially I got a web on him which stopped him from doing his trademark kiting. However he scrammed me and was able to pull away using his mwd and got out of web range. I was a little slow reacting and he got to a good distance for him with the potential to apply very well from distance. Then he boundary violated ending what was turning into a close fought match, with possibly his advantage.

We were both pretty tired it being 2.30 am my time and 3.30 am his time. He had also had a long intense journey through the losers' bracket which I had been spared. So really I think I won by attrition.

Veteran tournament player that I am a win's a win and I'll happily take it. I won a Dramiel, free entry to the next tourney. In addition a prize had been donated of a fit up Cerberus but the player who got it decided to give it to the tourney winner so I got that as well.

Thanks to everyone who took part and to Mikal for organising it.

I hope a lot more people decide to give it a go next time, it's definitely worth 5 million isk to enter, amazing fun.
Posted by Stabs at 19:25