To find the fun again Brave needs a higher proportion of wins. We can yammer on about doctrines and FCs and stuff but simpy we need easier opponents. We're a C league team trying to play in the A league.

What made me think of Nenna was two recent moves - RvB moved to one end of the CalGal zone and Pandemic Horde moved to the other. E Uni were already there, Karma fleet and J4LP aren't far away and other newbie friendly organisations like Stay Frosty are around. Plus of course one of the greatest pvp draws for new players - faction war.

So if we tried living slap bang in the middle of CalGal FW space we'd have fights where we outskillpoint some of the people we fight against. Lots of tiny alliances, freshly formed corps, soloers etc. I've fought against 1 day old characters in this space who have cheerfully burned right at me, guns blazing.

In Fountain where we live now there aren't that many people we can beat except in the relentless grind of the defence fleet, the occasional Bovril heroics and rare strat op wins. People are feeling the grind.

What's more a lot of our small gang stuff we go out ridiculously far on roams. Yesterday I took a fleet to Lonetrek then Deklein, another FC was out in Syndicate, another FC took us to Placid. All of those places are near Nennamaila. It's where the content is. For a newbie FC with a tiny gang of dudes in cheap talwars there's just not all that much we can beat around here (although I gather our newest, Johnny S Foster, just kicked ass with such on his first time FCing in I-C). Even so the odds are stacked against us here. And screw having to go 25 jumps just to get to space where 12 talwars are a threat not a snack.

Of course we bring our own content with us and the much more politically rich nature of low sec space should stop us getting backed into a diplomatic corner. There are 3 powers in Fountain and 2 of them have blued up against us. The only realistic counter is to blue goons and that's distasteful to many people and could have consequences we don't like.

In low sec our diplomats would have to work with a complex patchwork of alliances and old gudges and of course all our nullsec friends take an interest there too with PL and Imperium particularly lurking around this space. It would actually be a much better environment for wheeling and dealing and probably more fun for skilled diplos.

More newbie friendly, newbies would fly to our home easily without much help. Our dojo/HR people will love not having to do trips to Zinkon every day.

More than anything else what the Brave Collective needs is forward momentum.  Stuff to get excited about as we push other smaller weaker people and achieve successes, even if they're only small successes.

Brave carries around a lot of pvp simply because even in these faded days we're still by far the best alliance to attack. Although battle-hardened we're very much beatable, we will usually take fights (and if we don't form there's still lots of random content around). So part of what we would fight is the usual baggage which will follow us anywhere.

Lowsec makes it harder for those guys to farm us as it's a disadvantage to be -10. because of gate and station guns.

Our richest content is the vast numbers of very pilots swarming around in Faction War lowsec. It's a target-rich environment even without the Brave Effect. And tons of this content is at our level or below - pilots who are poor, low skill points, not expert at pvp and fitting. Some of them have yet to speak to another human in Eve. This means that there's accessible winnable pvp content for any size gang, even down to one pilot soloing.

Moving would spare us from Fozziesov which I'm going to call right now as an impending disaster for HERO as we are currently deployed. The blood is in the water. Not only have the other powers in Fountain ganged up on us,but Pizza and Lowsecnaya are roaming us for content and NC. and Test are in the process of deploying against us. The wolves are gathering and we are the prey - nullsec is a game that draws players towards perceived weakness. 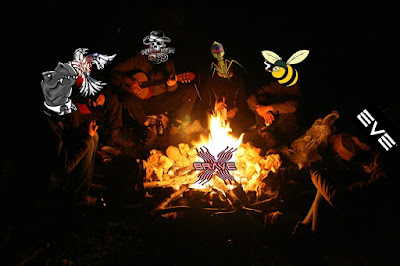 With Fozziesov gangs that want a fight out of us will entosis our stuff. There's nothing particularly grrrr Brave about it - it's just the mechanic, how the game works. A FC will see it as advantageous to force a hurried flashform rather than the current system of sitting on our undock and taunting us in Local. It's tactically superior - when you rush people they fit their ships badly, forget ammo, the fc may make errors with comp or links and you can dictate the terrain (eg force them to burn 2 jumps then jump into you at a stargate).

With as many as 6-8 gangs an hour at times our space isn't defensible and we will lose our current ability to sit things out when they get too hot. Without anyone particularly meaning to all our space will get reinforced and then conquered - they're not bad people, it's simply the game mechanics.

With the Nenna Plan instead of being targets we will be predators. There are 3 entrances to sov null within 9 jumps with owners ranging from a 200 man pirate alliance through J4LP to Goons. Of course it won't be just us hazing these systems - they will become 3, 4, even 5 fleet thunderdomes.

Maybe if we get strong again we can even lay claim to sov Cloud Ring and try to hold it against all comers.

All around the Cal/Gal Faction Warfare zone there are newbie-friendly organisations like RvB and PH living at a convenient distance so we can roam for content or FCs can easily arrange fights.

Living in FW space allows FCs to control ship size in fights - if we fight inside a novice plex nothing larger than a T1 frigate can join the fight. The factions need to take space and Nenna is right on the front line. That gives us fights we can wreck or even take mercenary contracts for. And the Factions are even easier to infiltrate than Brave is - any FC can roll an alt, join a faction, join the open militia fleets and see where their gangs are without any interaction with another human.

- missions from level 1s in nearby high sec to level 5s from an agent 2 jumps away.

- belt ratting. In addition to the regular rats there are clone soldiers and mordus rats around. In fact on a recent roam we picked up a Barghest bpc in Pandemic Horde's staging system worth 400 million.

- mining. Low sec mining is not quite as bad as high sec but certainly second rate. I imagine that as soon as we find our feet those crazy Bovril dudes will set something up in Cloud Ring 4 jumps away.

- huffing gas. 8 jumps to the Assilot constellation in Cloud Ring.
.
- importing. Once we establish Nenna as a market many other players will use it as pirates and FW players have some problems shopping in high sec. This will allow our traders to sell to more customers and the system benefits from discounted fees.

- trading. Renowned traders Gevlon Goblin and Moxnix have made hundreds of billions buying ineptly cashed out FW LP items and selling them at major trade hubs.

- at the alliance level money moons and pocos are legitimate targets. There are 17 r64s  in nearby Cloud Ring listed on Dotlan. Only 1 R64 is listed in Black Rise (there are 20 R32s moon  however!)  but data from the 0.4 systems which quite recently gained moon minerals is missing.

- best of all: cheap ships. Thoraxes talwars and atrons are absolutely fine for pvp in this area although if people want to there are plenty of opportunities to use the bigger toys too.

Another option that may bring both line member income and pvp content is joining a side in faction warfare. This is actually quite a complicated topic so I won't go into all the details but it's worked well for several nullsec alliances in the past.

Can't mince words, yes, it will hurt us. Some pvpers only like the big ops and don't want to do  "crappy talwar roams." Some corps are focused on the idea of living in null. We have our coalition to consider and the other alliances may decide not to come with us.

But Brave - and I say this as someone in a sister corp - is about BNI, is about the newbies. We have to get BNI working right to get the alliance working right and we are not in a newbie-friendly situation. Half the people in Brave don't know what to say when a newbro asks "should I join Brave?" No one outside Brave is recommending us, recruitment has plummeted, people are quitting Eve because it's not fun. We are currently listed on /r/evenewbies as "Not Currently Recommended." Some people are even predicting that Brave could die completely. J3B or Sound would be fine without BNI - most entities in nullsec would love to have them, even the elite Legions.

So it's ok to lose some friends who will go off to new adventures, it's not ok to fail Eve's new players.

Perhaps most importantly doing laid back low consequence pvp might help us find again our classiness and tolerance and see less of people who try to make things happen for us fall out with each other and end our dreadful attrition of capable people.

Anyway that's enough typing, I've got a new Tormentor fit to try out, see you in the novice plexes!
Posted by Stabs at 12:56