Next up on my whistlestop tour of old favourites is Everquest 2.

EQ2 has changed a lot for a non-paying player. It used to be that half your bags would be redded out, inaccessible and the good drops cost you $1.50 to equip. It was offputting and you were put firmly in place as a second class citizen. That's all gone now, paying gives you the ability to sell on the Auction House and a small movement and cash buff.

Leveling feels distinctly quiet but not much more so that WoW. On the plus side it means one can collect lots of lucrative shinies. 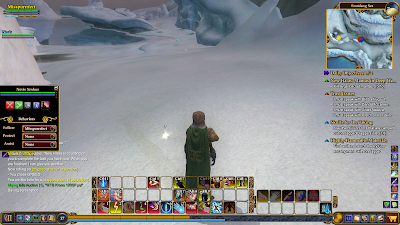 Another striking new feature is the mercenary henchman you're allowed to take around. He's astonishing powerful relative to my rather mediocre solo quester, I'd guess he's designed for raid geared players. The healer is relatively sane, he just follows my monk around and keeps him healed and doesn't do much else. But the tanks, oh my lord. Look. here's the before and after for my level 73 Druid against a normal mob:

After I recruited my merc:

He really is that strong, I'm regularly seeing numbers like 15k fly up when he fights - my best attack is 4k.

Now this is where I feel I should moan about dumbing down but in truth I kinda like it like this. The appeal of EQ2 for me is that it's a game where I don't socialise at all and just entertain myself by watching the numbers creep along and looking at the pretty monsters.

I also used some Station Cash to buy myself a level 85. A Wizard in fact, with one of these super strong tank mercs. He's pretty good fun in a press button collect loot kind of way.

EQ2 for me is a game of alts and it does alting better than wow. The crafting is useful and much more fun than WoW's. Also once a crafter hits max level all the other characters on the account get a permanent 20% exp buff (similarly with adventure exp although I haven't got an adventurer up to max level yet). All the alts accumulate rest exp which is triple exp while it lasts and it lasts several levels. At the moment I'm taking it in turns to play them all slowly burning down the ridiculous quantities of rest exp that have built up in the year since I last played. I also have made myself a private guild just for me and my alts which I'm slowly pushing up towards the level when I can get a guild hall.

If you are looking for a MMO and want something along the lines of WoW I'd recommend EQ2 very strongly. It's never been more enjoyable and accessible.
Posted by Stabs at 15:29