Among my many diverse operations in Eve one of the things I do is some high end PI manufacturing near Jita. I buy P2s at Jita, move them one jump, run them up to P4 and take them back.

It's become a little trickier recently to fill my buy orders.

P2 prices across the board are slowly spiking. Try checking Market > Manufacture & Research > Planetary Materials > Refined Commodities and check the three month graph product by product. There's three in decline but the vast majority are showing a strong upward trend. The three that have declined can be attributed to the inelasticity of PI production. In my own case (which is probably typical) I've picked my commodities and won't change unless I move or unless a commodity seems to have hit rock bottom and settled there. So people were probably overproducing those anomalous ones before and it's been taking three months+ for the market to adjust since we all keep churning it out regardless of Jita fluctuations because redoing it all it a huge hassle. 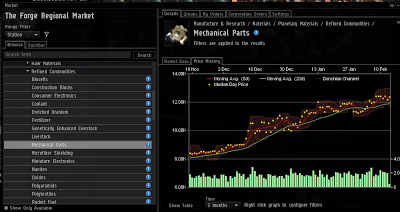 So my point is that most of these are going up and we can see this as a general trend in planetary products. But why? It seems, based on current game mechanics to be an odd pick. Planetary materials get used consistently by POS operation and increase when a lot of POSes are deployed or replaced. We know that we are currently in a sov grind lull - it was specifically given as a reason for the CFC and HBC to not fight each other. No one, we're told, wants to grind sov.

So that means this upsurge is either because people who feel safe are dropping more POSes (perhaps to run reactions) or it's a speculative bubble. The first is a definite possibility with Mynna pimping do-it-yourself moon goo processing on the Mittani.com. Not enough on its own though to explain the major movement in the commodities though (after all most people in a position to do this were already aware of alchemy and reaction profits).

It's also possible we have a spike in wormhole occupancy although I know no particular reason in the last few months why that might be so.

But my guess is that most of it is coming from a guess that DUST will somehow magically use lots of planet goo. I've already said that my opinion is that this is not coming soon which makes it particularly interesting - it's (if I'm right) ill-informed speculation. People are backing the wrong horse! So the price is going up simply because people are guessing (almost certainly wrongly) that it is about to become really really sought after to make DUST weapons with. And the value is actually going down because there's a lot of it in the economy, more than is being blown up in null sec sov wars.

In fact what may well happen is PI spikes, PI crashes, speculators collect rock bottom failed speculator planet goo, null explodes into war (because it's unlikely that the current stalemate will last more than a few months). Which even leads me to imagine that it's possibly an engineered crash - the market's slowly being led higher, some big null player will cash out at the top and stock up at the bottom just in time for a new Great Null War.
Posted by Stabs at 15:47