Eve: my first day in RvB

I made a very conservative fit to start my RvB experience - a long range Kestrel. It does 75 dps at 83 km range. This means I can fight very safely in the T1 frigate and T1 cruiser fights that characterise my new corp - I'm simply too far off to be picked in an environment where generally people pick the closest and most fits are short to medium range.


It worked really well with me contributing to a number of fights and not dying yet. We had two battles which we won so it was hardly surprising that a distance and not especially significant ship didn't get picked on. We then had one which we lost. In this battle I got picked on a lot but as I was so far out I just warped off. I warped out twice in fact then warped back for a third go just as we were bailing. So all told very safe - I hadn't even bothered to align.

Then this morning lacking organised fights I did some skirmishing with a few other members of Blue Republic. We killed a Hurricane, I soloed an Atron (I had almost got him a short while before when he tried to tackle me) and a Drake (bizarrely pve fit with cloak).

Just before downtime Jagtor took charge and we had a good fight with Red. They were playing hard to get so we resorted to a prober. While the prober and the rest of the fleet were lining up the warp in I decided to play solo with the enemy fleet. I warped in at 300 km and burned toward them. I attracted the attention of a frigate and some ewar and started shooting the closest tackler. I aligned out. They took me to 75% shields and I warped out. Then I warped back to the gate at 0. I sat on the gate for a moment to let them start locking me then jumped and burned back to the gate. A Merlin followed me through and tried to tackle me. I'm not actually sure whether he aggressed - if he did he took himself out of the fight for a minute. Meanwhile our fleet had landed on their fleet quite close to the gate on the other side and started fighting. I jumped in. sized up an out route and burned off and started shooting the primaries. I got a few kills including two killing blows and didn't even get locked up (except by drones).

That's taken me up to about 16 kills and no losses for my first day.

So a good first day and a lot of fun. Sniper fits seem amazingly good in this kind of kitchen sink pvp. Good for the individual anyway perhaps less good for the fleet. The thing with snipers is if I'm at 70km doing 75 dps and my opposite number is at 2km doing 150 dps then their FLEET is doing more damage. So it's a somewhat selfish fit.

This is where doctrines can make the game more fun. If we're all in close range brawling ships we all share the hazards evenly. If we all get in snipers we deny them the easy kills and no one is asked to assume more risk while I'm off in relative safety. While I'm in RvB we won't be flying doctrine as I believe they always do kitchen sink but I'm keen to get back to it at some point.

I think the next fits I try will be more unselfish but even safer - target painting. But for now, after some refinements here's the kestrel fit: 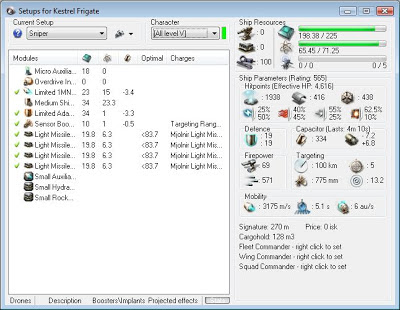