One of the most fun ships to fly in Eve is a tackle frigate. This is a small fast ship whose job is to rush to an opposing ship and hold them for a while, then usually die in a blaze of fire but hopefully having held the big expensive ship still for long enough that your back-up has got him nailed to the wall.

One of the most fun ships to fly in Eve will be a tackle Moa. This is a medium size fast ship whose job is to rush to an opposing ship and hold them for a while, making them think you're about to die in a blaze of fire but holding the big expensive ship still for long enough that your back-up arrives to help you finish him off. 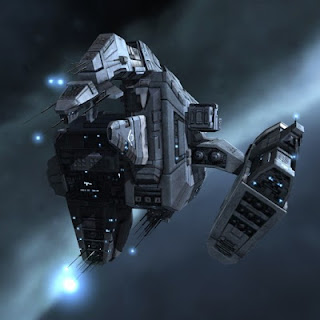 
And here's the gameplan:

Chase them, tackle them, scram them, web them, nos them, neut them and shoot them full of holes. Allow them to shoot out your shields then pop the blue pills one at a time for "miracle" healing when they're sure they've got you losing. Of course if you take more damage you may wish to start shield boosting sooner or even overheat it but the default option is faking that you're losing the fight.

This baby will move 1513 m/s before overheat, has 3 drones which slow them by 5% each even before you catch up, additionally slows them 60%, turns their MWD off, stops them warping off, neuts them, transfers their cap to you if they have more cap than you, and does 227 damage per second with its guns. It tanks 528 damage per second while the cap charges in the ASB last. Should work well in solo, small gang or big fleet pvp. Can function very well in gate camps, point blank brawls and chasing down snipers or protecting sniper gangs of your own.


It's just a bigger badder Merlin!


* Note: the ASB is expected to be nerfed in Retribution. It's likely it will be changed so that only one can be used on a ship (just like Damage Control Units). If that is what happens this fit will be viable after that nerf.
Posted by Stabs at 16:06