OK, having got that out of the way I'd like to start picking on today's guinea pig, TurAmarth Elrandir. Tur posted yesterday:

"Then I figured it out... nothing you say here can 'lead back' to a specific wormhole unless you give the name of a system you have a current active hole in, and that info is good for only 24 hours at best..."


First we can simply look for him in People and Places in Eve. Here he is. 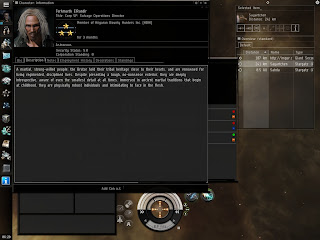 We now have his Corp and his Alliance. (Notice that even though I've hidden my character name here I've compromised my avatar's picture and location. It's just so easy to leak intel).

Now let's google his name. The first hit is his blog, then Eve Search which gives an archive of his posts on the official forums, then an old corp's killboard which on investigation had nothing more recent than April but further down the Google page we've got Battleclinic which shows him losing a Mastodon. In J103529 which is a wormhole system because all wormholes systems follow the format J plus 6 numbers. This looks promising. Let's find some details about this wormhole. Static Mapper shows us it's a Class 3 wormhole with a low sec static. We could check that information against information this pilot has discussed on his blog or on the Eve boards but there's something even more basic - let's see if he blogged about losing the Mastodon. Yes, he did. He lost it putting up modules at their POS. In fact we could possibly contact the other pilot involved and ask for or buy intel on which moon the POS is at.

We know where he lives.

OK? So, I hope I've convinced you that we who talk about the game can be found. I'm more careful than Tur but last year when I upset some ninja salvagers they were able to figure out who I was and organise a hunt for me. Every blogger is endlessly compromised.

Next, let's discuss what Turamarth went on to say yesterday:

In the year I have lived full time in holes, I have yet to find ANYONE who knows of ANY mechanic whereby someone could intentionally 'find' a specific W-space system.

I can think of a few. People quite often ask on the Eve Official forums for locations of holes (usually if they've accidentally locked themselves out). And of course they can ask on other Eve forums like Failheap or Kugu or privately on the board of a large nullsec alliance or coalition.

Another method which is sometimes used by the top wormhole pvp corps is called cycling. Suppose you have a class 5 wormhole with a class 3 static. Fly big ships like Orcas or Battleships through the static with the Microwarp Drives turned on a dozen or two times and the hole collapses and a new static is generated. Keep doing this over and over and you're rolling the dice again and again. And eventually it will come up snake eyes for your opponent. (Actually class 3 is probably too low to be worth bothering with this technique. It works best on the higher level wormholes because there are progressively less of each type).

Another method, which Tiger Ears uses a lot, is to keep notes. Quite frequently when reading his blog he'll find a wormhole that he's been to before and taken notes on. If someone notes down "trash these guys when we find their hole" and is constantly exploring wormholes they will find the target eventually.

Of course all this exposure is only dangerous if Eve has players who are vindictive, obsessive and incredibly patient. It has many with the first two qualities but that kind of patience is a minority trait. The reason I felt comfortable exposing Turamarth, who I like, is that I don't believe he's in any danger of being tracked down and wasted. I think there's a quid pro quo too in that if he and his corp move up to a higher stakes form of wormhole existence then they'll need to know this stuff. Hopefully they'll forgive me.

POS bashes are the most unpopular form of pvp in Eve. People can't even be arsed to form up to kick in someone's tech moon pos most of the time. Plus in wormholes you can only bring small ships plus your way in in virtually guaranteed to close before you can put a pos into reinforced mode, wait out the timer, then kill it off. Killing a POS with, say, a fleet of tengu involves persuading at least a dozen people to commit to an op that lasts at least a couple of days most of which is mindnumbingly dull. And for less effort you could conquer a tech moon.

Still it's good to internalise the lesson: if someone with enough resources wants you dead they can get you.

If you graduate to top level wormhole play with someone like Rooks and Kings then kicking in other people's wormhole buildings is very much part of the game - it's the wormhole equivalent of checkmate - and it's good to develop good habits early. And I haven't even mentioned how common it is that researching an Eve character can reveal real life information like real name, phone number and workplace in our increasingly open world. Nobody wants to gank someone then have him order pizzas delivered to your home at 4 in the morning.