Today I'm going to have a look at item affixes in Diablo 3.

Magic items in the game will have a number of affixes determined by the item type. I'm expecting that rare and standard magic items will work similarly to Diablo 2. In D2 a blue item had 1 or 2 affixes and a rare item had 3-6. This generally meant that rares were better than blues. (There were some exceptions but as Jay Wilson said in an interview rares would be the best items we'll ignore those for the point of thinking about D3). 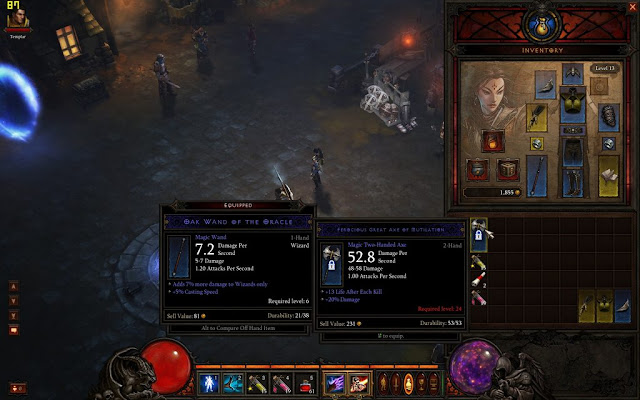 In this picture from D3 Beta we see two blue items. Both of them have two affixes, one each of suffix and prefix. So if we look at the names it breaks down to:

Rares don't follow this naming convention, they have names that are not connected to their item properties.

In addition there are crafted items. Crafted items usually have some fixed properties and some affixes. (It will say random properties, which is a synonym for affixes). 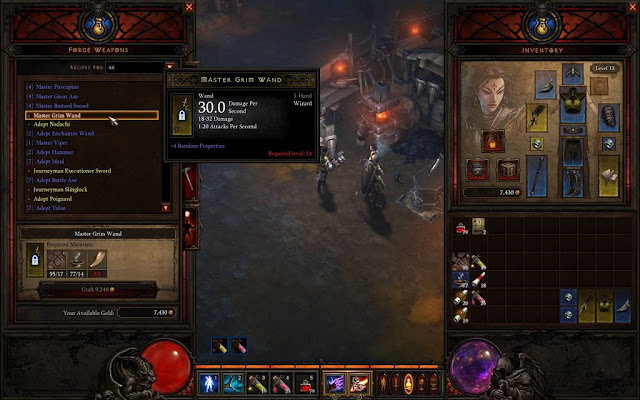 In this instance there aren't any fixed properties. When you make this wand you get 4 random affixes. The damage probably varies a little as well.

This will change each time you make an item using the recipe. Even the same recipe will usually produce varying items. 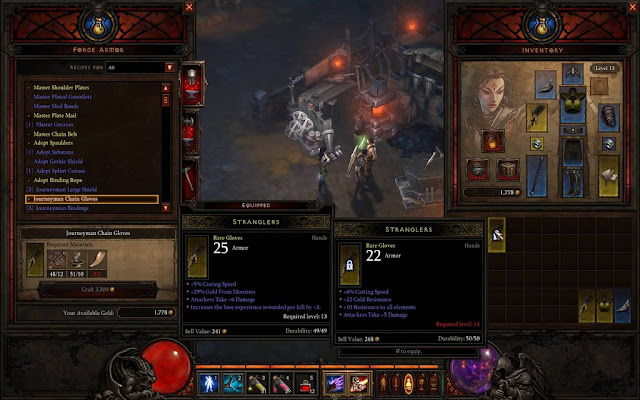 In this picture we can see two pairs of gloves made using the Journeyman Chain Gloves (rare) recipe. The amount of armour clearly varies as do the properties. We've got some properties that are the same on both (eg Attacker takes damage) but it's not possible from this screenshot to say whether the recipe gives 4 random properties or a mixture of fixed and random since it's possible that the gloves have the same properties through chance. Note also that the exact numbers vary on most properties. Here one Attacker takes damage is 5 the other is 6. That's just luck.

And there are also legendary (unique) and set items. Legendary items are generally fairly strong and may have properties that aren't on the standard affix list. Set items are like legendaries but in addition have bonus properties when multiple items from the same set are worn. Most set items in D3 are I believe made by craftsmen using rare recipes dropped by monsters.

One of the many mathematical peculiarities of D2 was that some very similar sounding affixes worked in very different ways. For example + enhanced damage was miles better than + enhanced damage to demons even against demons. This is because the first one got factored into the equation at an earlier stage so it got multiplied by skills and stat bonuses rather than just being added at the end.

We won't know how D3 functions mathematically until people theorycraft by doing practical tests. But just bear in mind that many of the numbers in D2 did not do what they claimed to. +20% attack speed did not make you attack 20% faster, +100% magic find did not double your magic find chance.

For now my best advice is expect it to do something similar to what one would expect but maybe not exactly. I do expect D3 to be less inexact, the D2 mathematics felt rather botched together. I remember Peter Hu, one of the D2 designers explaining a system to us on a theorycraft site and he sounded almost embarrassed.

We have details of what affixes do in Diablo 3, some from beta screenshots and some from this site. Bashiok mentioned the gold find radius affix in passing a few days ago - from this screenshot we see it's not just gold but health globes too. 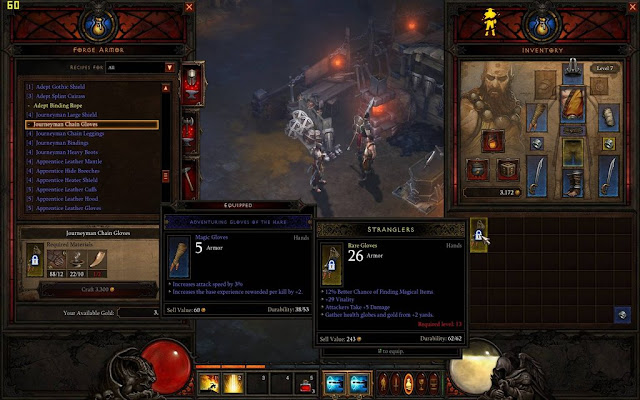 Looking at the datamined list we see that prefixes and suffixes unlike Diablo 2 are about the same list. I'm now going to classify addons into types:

So there's a lot to choose from and when you find a rare you could luck out and get 6 good ones or you could be unlucky and get some of the turkeys and/or get less than 6. And don't forget that if you don't like what you see there legendary and set items may have properties not on that list.

One thing that does occur to me - I can certainly see myself having a +salvage alt or gear swap and melting everything with a character who has + salvage in every slot.
Posted by Stabs at 10:59