Playing on with this very addictive MMO. I'm now Tier 5 in my gear which while nothing exciting is solidly mid-pack.

I've realised that it's all too easy to suffer excessive financial setback through mismanagement of gear. In fact I just found out the hard way.

I joined a ZvZ group which is a Zerg v Zerg group for some open world pvp. In ZvZ gear doesn't matter that much. If there are 10 of you and 3 of them you win, if there are 3 of you (because you got separated or over-enthusiastic) against 10 of them you lose. Gear will tip an even fight but that's a relatively unusual circumstance.

When I died I had a moderately expensive mount on me (a T5 Armoured Warhorse).  Just silly not to swap it out. The zerg moves rather slower than the speed of its slowest member and as a healer I'm not out flanking in exposed positions. I should just stick with the group on a cheap horse as all fighting will be done on foot. Anyway not a bank-breaker and lesson learned.

So it's about gearing on the cheap.

For me that's this build. 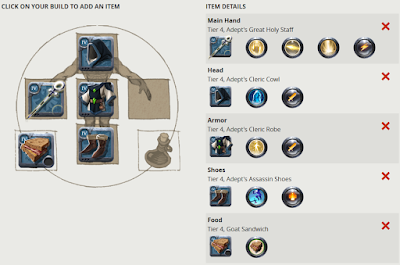 Add t3 or t4 riding horse and you're fine for supporting a zvz. Possilby a gathering tool if you think you're likely to make it home with more than the value of the tool.

It's probably not true for tanks. If you're going to charge boldly in you probably need decent survivability from gear quality.

But for healers and dps I think it's better to have more uptime (ie I can carry on past 3 deaths) than higher quality. (I died, sorry guys, got to go.)

I don't think the same is true of gathering unless you're consciously going into dangerous zones. I do most of my gathering in the black zones just outside our friendly town. For me to get ganked they would have to manage to sneak multiple people between me and the safe haven of our town. I have multiple escapes on the gear plus it's really hard to close quickly on someone in the very cluttered forest terrain. 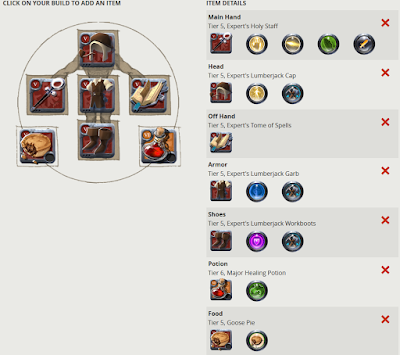 Horse is a Tier 5 Armoured Warhorse. 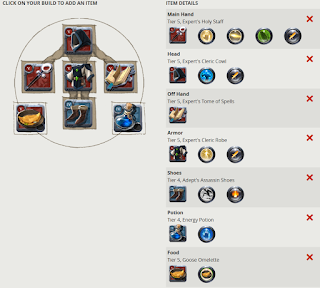 The boots are a little behind the other armour types as I realised late that I wanted to wear Assassin's boots at end game so they're in my fame-grinding set.

One final point about gear in relation to consumables. A lot of people skip food and potions. This is an error of analysis. If you are playing in a context that is quite likely to kill you then it's all consumable. There's no point cheaping out on consumables when you can just use cheap ones as everything is just going to be lost sooner or later anyway. When you die every half an hour, a hat is just a consumable that gives you some stats and the Ice Block ability for 30 mins.
Posted by Stabs at 21:21