Over at his blog, Neville Smit has called for player uproar because of his view that new content is "mostly to the interests of players who operate in null security space."

I think this is simply a mistaken impression, a result of what CCP is hyping, not what CCP is doing.

Certainly in the trailer for the new Citadels it looked a lot cooler to be one of the wreckers rather than one of the builders. On top of that CCP's excellent staff band released a new number, "Bring on the wrecking machine."

Smit goes on to add: "It was my hope that CCP was going to turn more of their attention to enhancing game play options outside of null-sec."

Well, sir, how about a whole new type of space, that isn't null-sec? 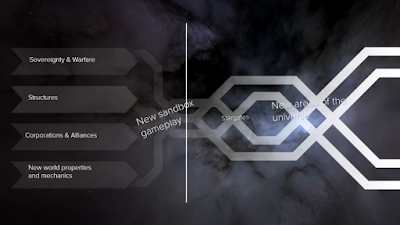 For the past two years CCP has worked on a grand project: player-built stargates. This isn't an addition to lowsec, hisec or nullsec. Like the Apocrypha expansion of 2009 this is a whole new type of space, different from anything we've seen before.

How's that for enhancing game play options outside of null sec? A whole new type of space.

In addition there are a lot of things happening that are huge enhancements for the game play of people all over New Eden. Citadels have caused a huge and lasting boost to the profits of miners and PI managers. There simply aren't the materials to meet the expected demand, a problem that will become more acute as more structures are added to the game. This is great news in particular for people who make P4s, which are traditionally concentrated in high sec. This is because P4s are equally profitable anywhere while extraction of P0s is much better in lower security systems.

In addition to the Citadels that support player organisations there's the new player-made stargates to be built, another huge industrial project.

For the first time Eve players destroyed more than they built. The April Monthly Economic Report shows Empire looking very healthy relative to nullsec: it has 4 of the top 5 mining regions (over 1 trillion isk worth mined in each); all 5 of the top producing regions, the top 5 regions for market value (dominated by Jita) and. in incursions, one of the highest isk/hour activities in the game.

Meanwhile in nullsec the safe and tamed North West has been burnt to the ground and is now an unrecognisable mosaic of interceptor gangs, broken POSes and new immigrants. The vast industry of The Imperium is broken allowing miners and industrialists in Empire to claim a larger share of the profits.

Low sec is flooded with content. 28,000 homeless people have moved in and are clumsily flying around trying to belt rat or do sites or fight the locals.

High sec is flooded with value - isk has become worth more, accounts are easier to plex, competition has been disrupted or destroyed, demand is up.

Now there was a time before when something similar happened, and I'd say for a similar root cause.

In 2011 outraged players shot the Jita monument in a player rebellion against the introduction of a cash shop monocle. This was ridiculous. Who gives a shit if someone puts on a cosmetic item? Monocles have now been in the game for 4 years and I couldn't name a player who has one - not because I don't interact with such but because I simply don't notice. No one does. It's negligible.

The reason players objected is from a kind of bad place: "he's getting something that I'm not." Reacting in a kneejerk way to something that really doesn't matter, that doesn't really affect you. So what if they put something in that isn't specifically for you that isn't all wrapped up in a bow in a parcel with your name on it bestowed on you with a thank you thank you thank you? Throughout its entire history Eve has worked on certain elements of the sandbox one at a time. When they worked on battleships it was not a slap in the face to anyone who does not fly a battleship.

Consider. One of the occupy Eve bloggers, Drackarn, explains his outrage by referring to the crimewatch round table. A few years ago we had a whole 6 months expansion devoted to Crimewatch, frankly an amazing amount of time for something that's really rather incidental. But CCP fixing that formed part of a greater whole, where they make the overall game better. The rest of us didn't riot when crimewatch was added even though it has zero affect in nullsec, in wormholes or on peaceful people in high sec.

It really feels to me, like the Monocle, that this is a vanity issue. Sure CCP have added a ton of things that improve PVE like burners and new drifter content, that improve industry like citadels and Crius but they didn't specifically yammer about it at Fanfest and now some poor entitled bloggers are feeling insufficiently pampered.

Everything on Neville's list of demands is something they are actively adding to the game if only he'd pay attention. NPE? They've just hired a new guy who gave a major presentation on it at the Keynote. Lore-based PVE exploration? They've been developing drifter content for a year with continual updates and new features. Variety in harvesting? They've just added new frigates designed for extracting resources from danger zones. He wants mercenary to become a viable career? Wake the fuck up, Neville, half the game is currently on mercenary contracts.

So here's my message to the "85%." Rant less, play more. The content you want is in the game and more is coming. So what if CCP has picked some other people in the community to fawn over and tell them how special they are. Get over yourselves. The road map is not for nullsec. The road map is new space, it's for whoever wants to go there when it's unveiled. Just play the damn game.
Posted by Stabs at 06:13