The burden of democracy

Democracy is a core part of our values as Westerners coming from the cultures we do. TEST alliance, which is based on the grass roots and permissive Reddit forum underlines those values further, as does the largely American base of the alliance with their written constitutional guarantees of free speech.

However there's two obvious prices you pay for operating as a democracy in Eve - 1) slow decision-making and 2) vulnerability to hostile agents.

As The Mittani once put it:

Abhor Democracy, Mistrust Reason: Most of the western world is governed by ‘representative democracies’ of one flavor or another. In practice, most of these are republics or simple plutocracies, but when players come to EVE they often try to recreate democratic governments as their first structures, as they have been taught that ‘democracy is good’ while blind to the fact that their real-world country is not actually a democracy. Similarly, there are some who believe that human behavior is governed by ‘reason’, despite decades of research into cognitive flaws. If you encounter someone so misguided as to actually believe in ‘democracy’ or ‘reason’ in EVE, run. Or, more likely, take them for everything they’re worth. 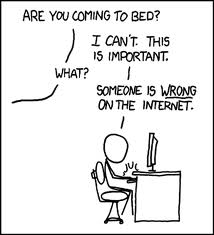 (With credit to XKCD)

TEST suffered huge burnout during the Fountain War and has a history of burning out its talent. Not only that but when people leave they are often bitter. Kurator, heroic defender of Fountain, who at one point during the campaign put in a 50 hour FCing stint left TEST to gatecamp our exit from Delve and take bitter revenge on the evacuees. (Although to my immense satisfaction I did get to use the words "Kurator is primary" yesterday when we blew up his Slasher).

TEST's next best hope, in my opinion, rests in its stated intent to transition to the campaign commander model used by Pandemic Legion. In this model for the duration of a campaign the FC in charge essentially runs the alliance. I'm given to understand they run it completely - one campaign commander even threatened to disband the alliance recently after people were playing particularly badly.

I'm really not sure TEST quite has prepared for the consequences of this. For example if someone's running a campaign (as Kurator was) and people start getting political, this can't be done, that can't be done, under the new model will the FC be able to sack them and replace them with someone more compliant. Because what a military leader needs is obedience not analysis, he's not telling you to do something because he wants your views on whether it should be done, he's simply telling you to just do it.

TEST has a culture of undermining its leaders. Recently Boodabooda, our CEO, kicked a disruptive player. When he woke up the next day that player was back in TEST, someone had just invited him back in. That led to a storm of argument and mudslinging that seems the main cause of some of our best FCs burning out, notably DingoGS. This kind of internal drama is inevitable when people who are not in charge feel able to exercise executive authority.

So the question for the next few weeks is can Eve's main Reddit guild get over its love of arguing on the internet to focus on playing Eve effectively?