CCP Fozzie's latest dev blogs are epic attempts to address the problem of stagnation in nullsec, what Crowfall calls "the Uncle Bob issue."

"[By year 10] Bob is now an unassailable tyrant and anyone who even tries to challenge him is crushed instantly. Nobody's having fun, not even Uncle Bob. A strategy game inherently has to have the chance to restart."

Is Null Sec at the stage of "unassailable tyrants?" 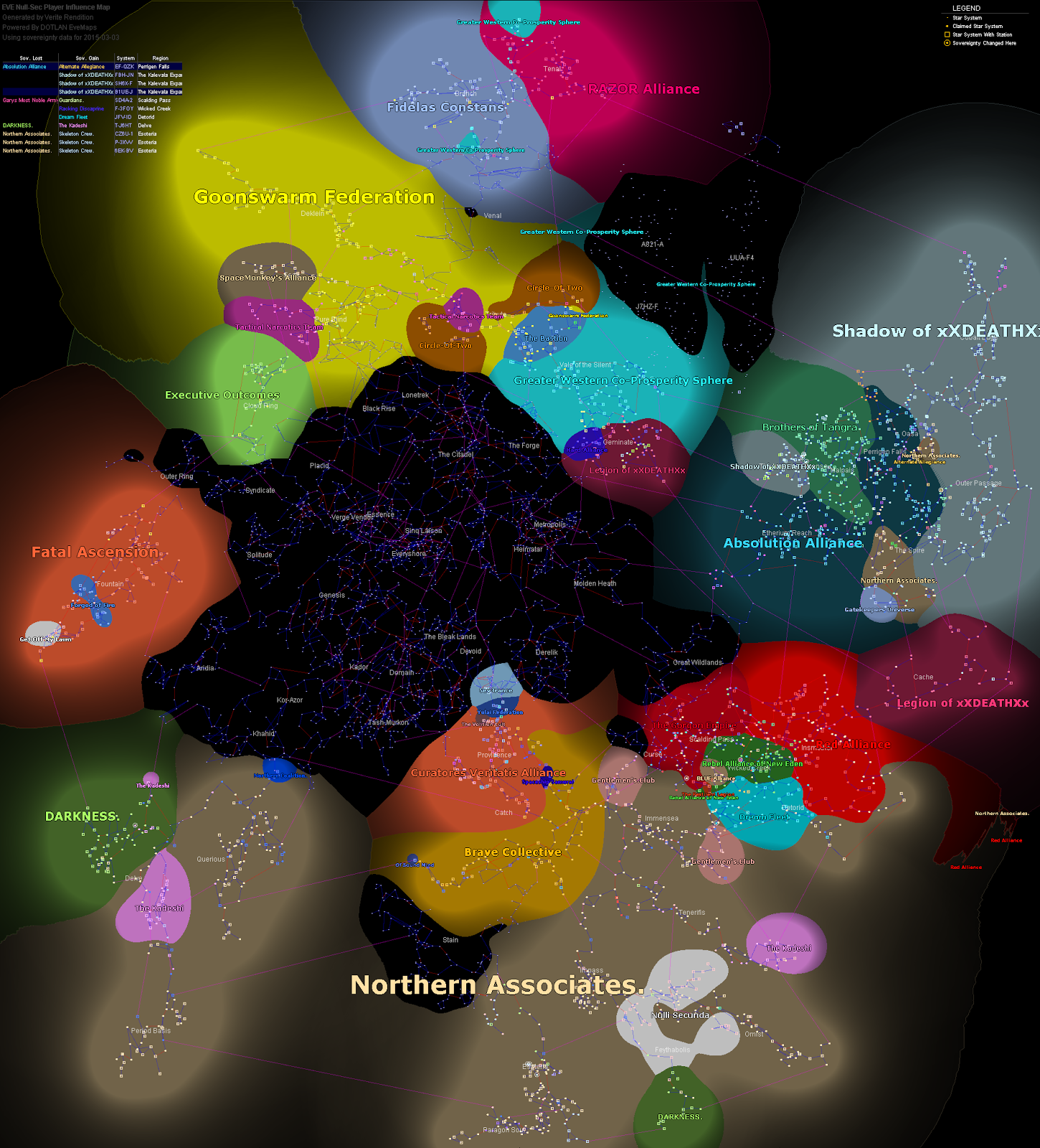 I think so. It's true that people coming into null sec are not always crushed instantly but that's because the big boys allow them to come in then farm them for pvp. Space is now 2 dominant factions: the CFC and N3/PL. There's also the Russians - traditionally left to do their own thing - and independent entities permitted to exist for farming. Gevlon went as far as to describe BRAVE as renters who pay rent in ship losses rather than isk.

Renters dominate nullsec. Even if we don't consider alternate arrangements which are renter-like - paying rent in ship losses or paplinks -  a quick look at Dotlan shows the absolute dominance of renters in nullsec. The biggest sov holder is N3's renter alliance, next is xDeathx's renter alliance gifted to them by PL, then 2 real player alliances then 5th is PL's renter alliance and 6th is the Goons' renter alliance. Even analysed by population, renters make up 4 of the 7 biggest alliances in the game.

Renting is emergent gameplay a system where players manage a conflict driven high reward space by avoiding conflict, paying stronger people to do the conflict for them. This will become more or less impossible under the new Sov system. Sov structures will be continually tested by anyone who can reach them. The role of wormholes in accessing remote parts of null is not insignificant post-Phoebe either.

I'm in favour of seeing a sharp decline in renting. I think it tends to create boring space, where people mine or multibox in safety and seclusion rarely seeing a hostile. As an FC I consider most such space not really worth attacking because they'll just pos up and it's not like we can do anything to threaten the sov. Interceptor gangs targeting inattentive ratters are the only effective counter-measure and that's gnat bites in the overall scheme of things.

But what will happen to an Eve where most null sec residents have decided not to pvp, just to grind their next super in safe zones?

Well there will be some quite sharp economic effects.

We will see more ship destruction, a lot of destruction of sov structures, people spending time fighting instead of ratting and mining and people hiding in poses or stations when they could have been ratting or mining.

A big decline in the production of isk would lead to less money chasing the same goods, ie deflation. So all goods will be likely to become cheaper except perhaps nullsec ores and their derivatives like Megacyte.

Loyalty point items, exploration loot and wormhole-exclusive materials will likely become cheaper, the latter being particularly true in view of the upcoming rebalance of T3 strategic cruisers (likely to be a nerf).

Will Eve be a better game? I think so. Conflicts abounding more reward for the people who manage nullsec successfully.

Will the Uncle Bob problem be solved? That seems less clear. If a big boy comes to a small sov holder and says "give us 20 billion or we'll wreck you" they will be likely to be able to extort money. So it will still be like renting except without the flagging. There is an out though - if someone becomes sufficiently bitter they can drop sov then spend all their time making their oppressors lives hell from NPC space.

What may solve the Uncle Bob problem and what shouldn't be forgotten is that there is still the prospect of a whole new type of space coming when the massive player-made stargates project is finished. So someone feeling oppressed by CFC and N3/PL would be able to move to what is pretty much a whole other game zone and forget them. That will be the real test of the sov revamp - whether the sov fixes keep players wanting to stay under the yoke of the blue doughnut when a viable alternative opens up.

So here's my prediction: the sov changes will make for exciting times in the short term but will ultimately fail to shake up nullsec and as soon as a new zone opens up on the other side of the player made gates all the farmable people will emigrate leaving a bitter bitter core of veterans sitting in their supers blaming CCP.

Is anyone remembering Trammel?

(Edit: thanks to user /u/mechacanadaII or reddit for pointing out an error)
Posted by Stabs at 08:18