Further details have emerged from management about the new "Fourth Age of Diplomacy." 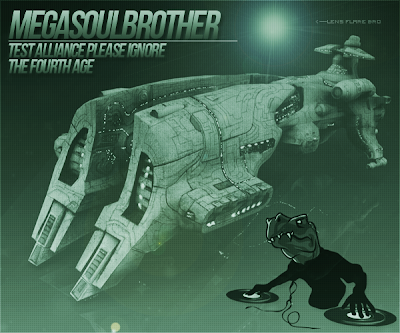 It's official. It's happening.
Posted by Stabs at 01:07 No comments: Meanwhile here in TEST we're being informed something is going down. What is going down we don't know down at the grunt level but it's definitely going down.

A few confused newbros have been asking "what's happening?" The rest of us have been confidently replying "IT'S HAPPENING!"

A source in senior management had this to say:


Test Alliance Please Ignore, business as usual.
Posted by Stabs at 12:30 No comments:

The battle to save Delve 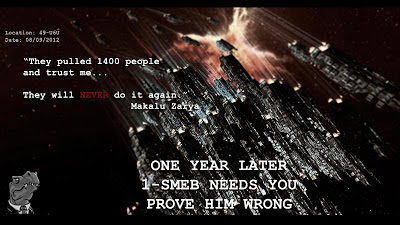 It's been a tough week for the Rebellion. TEST's decision to isolate itself politically has spilled blood in the water and the sharks have turned up in numbers.

The vital system of 1-SMEB connects Delve with low sec. If lost it will allow the invading NC./PL forces to stage from there and to bridge more or less anywhere in Delve. Hence a huge push by the alliance to draw overwhelming numbers for tonight's big fight.

It's been a wonderful week to be a TEST pvper as you cannot go two jumps without finding a fight. Last night I formed up a fleet to kill an Initiative roam, got another option to kill a gate camp in Fountain - I think by Godfathers/Gang Bang Team - bumped into a cloaky Goon camp on the way who cloaked up and hid before seeing us (hello spies on our Mumble server!) then got convoed by a PL fc for a fight. And found out someone else had killed the INIT. roam.

I took the PL guy up on his offer and really enjoyed a talwar v talwar brawl. We killed 2 and lost 15 but we made a lot of mistakes, both me as FC and some pilots as individuals and while we had a few more ships than they did we had quite a few very new players who were outside shooting range for a lot of the fight. So I was pretty happy with that. 15-2 might sound like a bad scoreline but if you were a park football team playing Manchester United you'd be really happy with that score. (Not that TEST is a park football team per se, but the kind of player who comes to a destroyer roam run by a new FC tends to be new and inexperienced even relative to the rest of our comparatively new and inexperienced alliance).

I've been writing up some of my after action reports in an attempt to rehabilitate the Eve Official Corporation and Alliance Discussion forum which is sadly lacking in content these days.
Posted by Stabs at 10:13 No comments:

It's been a weekend of momentous battles for TEST Alliance Please Ignore. On Saturday night (very late for me) we had a tremendous battle in 1-SMEB, the gateway to Delve from low sec. Test was trying to replace a crucial tower with a larger version that could be better defended. Northern Coalition. and Pandemic Legion are trying hard to capture this system and set up POSes.

TEST formed in our new ahac doctrine. I had rushed back from Rahadallon in Devoid having spent a merry hour blowing up people there before the start op (including some PL dude who was streaming his Vigilant on twitch tv). I grabbed ammo and came to the strat op in my sniper Harpy.

After a superb fight in Radahallon our FC there had persuaded Brave Newbies to send a contingent of frigates to support Test in the battle and they flew superbly. Big thanks guys!

We formed up at the pos and surrounded ourselves with dictor bubbles to try to prevent bombers getting good warp ins. A cyno went up and I flew over and shot at it but sadly not in time to stop PL and NC. titan bridging in.

A big close range brawl ensued which initially went quite well for TEST. We were trading ships fairly evenly, destroying a Loki and several logistics ships from NC. and a big chunk of PL's foxcat fleet including a few of the ultimate nullsec subcap powerhouse - the billion isk faction-fit Navy Apocalyse.

The CFC brought an assault frigate fleet but stayed away for the first part of the engagement.

After a while though we were unable to sustain repairs or damage. Our FC squeezed out a last couple of kills with some tricksy target calling then we stayed for a short while taking a beating. Meanwhile bombers from pizza, test, goons, even a maverick from the Retirement Club were cheerfully bombing all sides.

Comic relief was provided by the Dinner Plate coalition who brought some Nagas all the way from Esoteria only to get cheerfully shot by all sides, even the Goon Hawks, and sent home quickly.

We regrouped and came back to the grid seeing NC. putting the POS into reinforced with Dreads while PL hovered watchfully. We didn't have enough to challenge at this point - one pilot admitted he'd reshipped seven times in the battle.

A battered TEST took refuge in the POS shields, enough stront having been placed in the tower to give us 10 hours of respite.

Somewhat amazingly my little Harpy had survived both a frigate roam and the entire battle.

I wasn't at the next battle but we managed to again save the tower but again it got reinforced. This time for 1d 10h. The battle for 1-S continues.

And then yesterday afternoon in Esoteria an amazing bomber run by TEST wiped out a Dinner Plate Coalition battleship fleet and sparked an hour of raging in Local and via convo. It's believed that the disaster was caused by a mistake by Sort Dragon which can't help the morale of the nascent coalition.

For Eve players who haven't tried it, null sec seems like the Great Adventure, the Final Frontier, the harshest, most storied and most epic playground of this vast sandbox.

Once you've experienced nullsec you realise that all that is true while it is simultaneously true that it is a hotbed of angry egotists, with leaders making pointless decisions that make a ton of work for line members and falling out with people over the most ridiculous things.

Say one thing for nullsec, say that it's a rich experience.

As a nullsec veteran I'd say this as my most important single piece of advice: go there to make friends. Nullsec is social and everyone who lives there lives there by the consent of other people. A setup like Provibloc which is militarily weak has survived a decade because they're a class act and everyone likes them, and all their neighbours like going there and shooting them. In nullsec we roam the people we like and conquer the people we hate.

My next piece of advice is: Pack Light. I'm not necessarily saying you'll lose all your space but it's very important to be able to move quickly and not too onerously. Your own alliance or coalition is quite likely to ask people to redeploy then a month later change their mind and ask you to go back. To your leaders you are chess pieces to be deployed against opponents. One of my friends burned out over this, it was simply too much of a pain to move his billions of isks of ships to NOL when he joined us, to HED when we deployed there and back to NOL when we reset HBC.

Equally when you start pvping start light. Vigils, Mauluses, Celestises, Blackbirds, T1 Cruiser logis are very strong cheap ships useful on every fleet so start with them rather than immediately welping (losing) a Rokh.

The next thing which comes as a shock is that most people don't defend their territory. Roaming gangs and stealth bombers roam and hunt and your veteran pvpers are likely to be in enemy territory roaming or afk cloaking. The mechanics encourage people to seek pvp in hostile space.

Now I'm not saying don't hunt down intrusions, just explaining that most people won't do it. (I actually love home defence and it will be the topic of tomorrow's post).

Next you should start to learn the nullsec politics. Some of these sites make pretty horrible reading but the only way to draw a picture of what's going on is to read the spin from both sides.

Your corporation's and alliance's forum/jabber
If you don't know what's going on in your own community you deserve to be kicked back to high sec and probably will be.

http://themittani.com/
Well written articles but with a strong pro-CFC bias

http://www.kugutsumen.com/forumdisplay.php?6-EVE-Online-Uncensored
A playground and boasting pits for most of the serious English-speaking nullsec players, particularly the FCs. It's pay-to-post now so if you don't already have an account just lurk. In fact even if you have an account best not to stick your head up over the trench-top as they're thin skinned here and itching for fights/victims.

http://shitonkugu.blogspot.co.uk/
The podcast of the Kugu crowd. Surprisingly engaging, they talk a lot better than they post. NSFW.


OK that's a lot to take in - is it worth all the effort? My answer - hell yeah!

Say one thing about nullsec, say it's an absolute blast! I'm deeply sorry to say that a member of our community by the name of Tony, who played Eve with TEST as R76983 passed away yesterday.

Best wishes to his family and loved ones, rest in peace.
Posted by Stabs at 12:08 8 comments:

TEST has reset most of the rest of our coalition and kicked 6 corps. We will stay blue with TRIBE for as long as they can put up with us. We are temp blue with INIT and Raiden. and in a couple of weeks both sides will see whether to continue that or not.

This breaks the HBC.

And we're loving it!

This leaves us in two very rich nullsec regions without the support of a strong coalition so being attacked is quite likely. We're looking forward to a defensive war plus whatever may follow. I guess we'll be seeing some of you in Faction Warfare in 2 months, maybe. If you love shooting spaceships now would be a very very good time to be part of TEST.
Posted by Stabs at 23:49 2 comments:

But you knew this all along, right?
Posted by Stabs at 18:48 2 comments:
Newer Posts Older Posts Home
Subscribe to: Posts (Atom)