Kesper North, CSM, veteran of the Fanfest alliance panel, has posted this on the GENTS forum.

It was a good story. There was adventure and intrigue and big spaceship battles. We pulled off some remarkable feats and were involved in some of the most momentous things to happen in EVE's history. We had larger-than-life heroes who pushed the envelope of the game to its limits. But the time comes for all good things to end.

After consulting with the CEOs of each of the corporations within GENTS, as well as other members of the executive team, Kippig and I have jointly decided to shut down GENTS. Sometimes, problems become endemic to an organization, and no amount of leadership change will rehabilitate the structure. When that happens in EVE, it's better to get a fresh start with something new. So after three and just-shy-of-a-half years of GENTS, we're going to gracefully exit the stage.

This shutdown will be gradual and orderly; supercap builds will have time to complete and there will be plenty of time for corps to find new homes elsewhere in the CFC. Sov and moons will be transferred to GSF in an organized fashion; we'll work with moon holders and GSOL to manage that transfer safely.

As for alliance isk and assets - we're working on a plan to divide assets and isk among member corps, so you guys will have a nice present to remember us by. Exactly how we do that division of spoils is still being discussed; we'll let you know when we come to a decision.

Kippig knew he was going to have to go to bed before I was able to get home to make this post, so he wrote up a statement and asked me to include it in my post. Here it is:

Yesterday was a weird day. The moment I got appointed CEO I started talking to all the relevant parties I could find to figure out what needed to be done to keep the show on the road. When it was midnight again I finally realized that we would not be able to turn this around anymore. Do it right or do not do it at all, that has been one of the principles in GENTS we live by. It saddens me deeply but I do not think we can do this right anymore, so according to that principle, we do not do it at all. Gents will be winding down.

I have enjoyed my time in GENTS. Starting out in Cloud Ring, catching a cloaky camper that was terrorizing the region on the first day I joined. Doing scouting during the first Vale campaign and becoming an FC once we returned back to Cloud Ring. I kept getting promoted until I finally found myself in the spot I am in now, with all the experiences and things I learned from everyone I met on the way. I not only learned a lot about FCing but also more about people, what makes them and what motivates them. I am by far knowledgeable enough on that aspect but I like to think that if you have the heart in the right place and try you will at least have a shot at things working out.

And finally I would like to thank Kesper North, the man who made this all possible, and poured everything he had into this all the time. The reason GENTS has been around for this long, three years already, and has grown from a few 100 members to an almost 3000 member alliance with a swath of sov, that reason is Kesper North. I think he can be proud of what he made happen over the lifetime of GENTS.

GENTS will be winding down, this means that we are going to transfer our sov in a coordinated fashion to GSF. Supercaps in build will be allowed to complete. Everyone will have enough time to decide what to do after GENTS and your CEO’s have already been informed about this and are most likely working on it right now. One of the options that we’re working on is a way for corps to stay together by joining a new alliance administered under the GSF organizational structure; your CEOs have been apprised of this opportunity and you should let them know your preferences in how you proceed.


I want to add my voice in thanking everyone who has made this alliance a success over the years. You've done wonders, and you have a bright future ahead of you. I wish you all the best of luck. As for me - I'll be sticking around the CFC and enjoying a quiet retirement in Goonswarm. I would encourage you all to find new homes in the CFC - ideally together, in  the new alliance Kippig mentioned. The alliance is ending, but the coalition is healthier than ever; let's go keep it running.

I will be hosting a final SOTA Monday at 1900 EU time where I'll try to answer other questions you may have, and so we can reminisce about the good times. A wake of sorts, if you will. I hope to see you there. 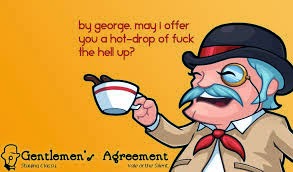