The march of progress - evolving our space

Pirate Detection Array 3 proved a sweet upgrade even in our rather crumby space: we went from 4 level 5 anoms and 4 level 6 anoms to this: 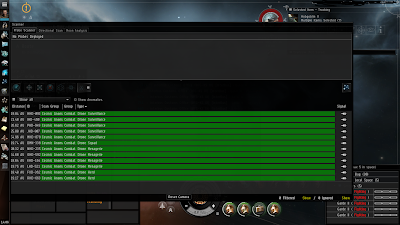 The system rates anomalies at

The pirate ones get various levels which mean better sites but drone ones don't get that. For example Guristas Forsaken Hub would just translate to Drone Squad in our space.

So getting to level 3 and installing the third tier of pirate detection arrays gave us a level 5, 2 level 7s and a level 8. I run these by doing the squad if it's up, otherwise a herd now. This has improved my isk per hour from about 10m to about 30m. Not great but for me this crossed the barrier from Not Worth Doing to Worth Doing, especially as I can run them on two characters simultaneously.

We should, fingers crossed, install Pirate Detection Array 4 tonight. (There was a bit of a delay as our jump freighter service got distracted by Final Fantasy 14!)  Hopefully that will bring even better sites. Generally as the site level improves you get more battleships and less frigates with cruisers being more or less constant.

In the background, behind the stretched Probe Scanner window, you can see that I'm demolishing a poco. So in addition to the ratting we'll soon have PI production in place, another steady income stream both for individual pilots and, via taxes, for the corp.

You may be wondering why we're putting this effort into a system with rather poor truesec. It's all about the rent. This system is cheap to rent and will still, eventually, give us high end sites. Renting a very low truesec system would cost us several billion more per month.

One day, when the corp is a bit bigger and we're feeling flush I'd like to us to take on a second system, possibly with better truesec. My idea is to have a jump bridge so if someone comes into our ratting system to inhibit us we can just take the jump bridge to our other system and keep right on ratting. Preferably a system that doesn't have a convenient stargate route so it will be within the 5 LY jump bridge range but will be about 30 jumps by gate for anyone who has come up to dick with us.

I used to do this when ratting in Fountain right in the middle of the Goon invasion and it's a pretty sound technique - so long as they don't camp both sides!