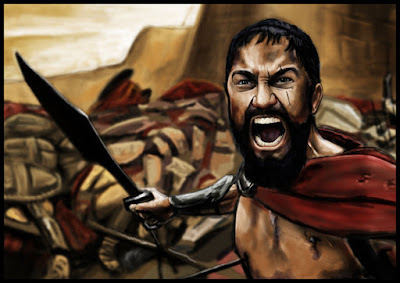 New DLC for Dominions 5 arrived this week which included a race called the Mekone, a race of Spartan giants. I am now leading my awesome giants (and their puny human slaves) in campaigns to conquer the world and slay your puny human gods. When I am in your presence, Mortal, you may call me Argghh, no please stop but otherwise call me Leonidas.

This is my Pretender God for this campaign, an imprisoned scales-heavy statue. (Statue of me of course!) 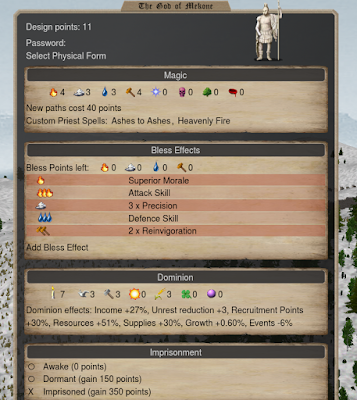 The Mekone have no sacred units (although we do have sacred commanders). This is our roster:

All Helote units cost 8 gold and 3g/year upkeep. The armoured units cost more resources. Generally I find that a nation starts out resource-constrained in Dom5 then moves towards being gold-constrained. My initial impression is that Helote Ekdromos are good units at the start of the game, giving a lot of bodies for the battlefield pretty cheaply. All helotes can get promoted, the promoted form has 4 higher base morale.

More expensive than Helotes without being better. Freedom is wasted on humans.

Discobolus: almost-naked athletes who chuck discus at the enemy. And at the ranks of Helotes screening for them. Very resource cheap which makes them a decent choice at the start. The discus hit really hard (I've seen several hits over 40 damage). They are very dangerous to friendly melee combatants. I've now started arranging my lines as follows: (troops I care about) (troops I don't care about) (big gap) (discus-chucking nutters in their underpants).

40 gold, 32g upkeep. Very strong, well-armoured giant infantry. The hoplites are better armoured and cost more resources. I prefer to recruit the hoplites and gradually switch over to them as my economy moves from the resource-constrained start to the gold-constrained phase of the game.

Neodamode Commander: human Leadership 60 commander. Cheap way to collect up units and ferry them to better generals. You wouldn't want to fight a battle with one.

Geronte: cheapest Priest/FE Mage/researcher. Old. Sadly a full research station of these guys has a winter health crisis that rivals the British NHS. Like most Mekone priests has the Inquisitor skill opening a possibility of sending them in stealthed to attack enemy dominion.

Ephor: Priest/FAE Mage/researcher. Even deeper into old age that the Geronte. (For some reason this unit has shorter lifespans). One is needed in each city for an annual event.

Polemarch: excellent thug/general/FE battlemage. Comes equipped with 4 items including a God-slayer spear which will wreck gods, titans and sacred units.

Cyclops: powerful FAWE mage/researcher/item crafter. Has Master Smith 1 which adds 1 to his path levels when making magic items. So with one point in Water he can craft boosters which will get him up to 4 or 5 skill in Water for crafting certain powerful items, notably items that let you lead land armies into the sea. Not sacred unlike all our other magi.

Laertes (spelling?): stealth/assassin units. Can't be recruited. Generated free by an annual event from any city that has an Ephor.

Old age management: stray thought. Old age strikes at midwinter so there's some play in when you recruit these units. A Geronte recruited in late winter gives you almost a year of service before there's even a chance of his health breaking down. Or you could recruit a Basileus in mid Winter and discover that the month after you paid 300 gold for him he's already dying of pneumonia.

We get two things that are restricted to our nation only: an item and a spell.

God-slayer spear. Good item but our Polemarchs come pre-equipped with one. 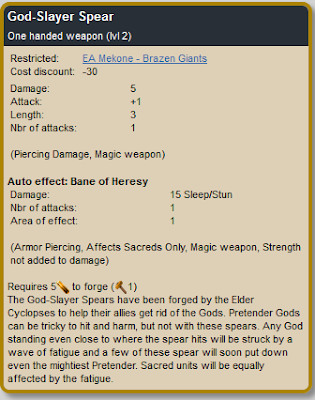 Gigantomachia. Hard to say how impactful this global enchantment is. We'll make it our end-game goal so we can try it out in this playthrough. 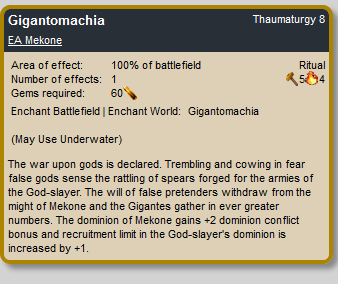