Shadowrun Returns... or does it?

Shadowrun was one of the great tabletop role-playing games of the nineties. A stylish game set in the near future, it combined Matrix-like cyberspace elements with a gun fanatic's wet dream of a selection of ordnance and topped it all off with a hardbitten cynical Blade Runner style setting. Oh and some people have mutated into Elves, Orks and Dragons too. 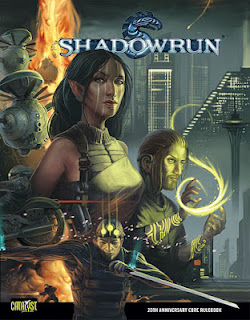 Shadowrun's appeal was that it felt modern but was still fantastic. Problems were contemporary in nature, usually dealing with some kind of industrial espionage. If you wanted a gun, you picked your shooter from a proper catalogue. If you couldn't get in through the door you could try hacking. Also there was magic, an interesting system with Magicians, Shamans and Adepts. The game has a strong cultural influence from Native American history and folklore.

The game is still running as a RPG and is still quietly popular but it's never quite made a good transition to video gaming. There were 3 modest console releases (and a fourth one cancelled) and a PC/Xbox 360 release in 2007 which was priced too high and flopped.

Out of that fiasco the game's creator, Jordan Weisman, managed to negotiate a deal with Microsoft who now own his game and he's starting up a kickstarter project. You can see details here. They need $400k by 29th April to go ahead and they're just over $250k raised so far.

[Update 5.4.12. They've now made it. Well done them and thanks to any of you readers who supported the project.]

At the basic donation of $15 you get a copy of the game plus a PC wallpaper. $15 for a half-decent Shadowrun game would be an absolute snip, it really is one of the most interesting settings for a game ever written. And there's every reason to think it will be a good game because Weisman is heavily involved and writing a lot of it and they'll have a freedom as a small indie that they didn't get when they were at Microsoft.

Let's hope it comes out. And if it does come out, remember:

Shoot Straight. Conserve Ammo. And Never Cut a Deal With A Dragon.
Posted by Stabs at 02:23